By Pamela Young Special to the HNO

It was what I’d always imagined Ethiopia to be like. Afar was dry, hot, and barren. Located near the border with Djibouti, it’s where the bones of prehistoric Lucy were discovered. Afar is a region that’s mostly desert baked by a scorching sun, where afternoon temperatures reach well over 100 degrees. Camels dot the landscape, winds sweep up little sandstorms, and nomadic herders with daggers tied to their belts saunter around in the sweltering heat. I visited Afar last summer, a month after arriving in Ethiopia. When I stepped out of a Jeep that brought me there into the light of that unforgiving sun, I thought to myself: Now, finally, this is Ethiopia.

Except Afar is not Ethiopia, at least not all of it. It’s only a small part of a diverse country that I got to know through a 10-week internship at the Decentralization Support Activity Project (DSA). DSA – a public finance reform project being managed through the Kennedy School of Government – has, over the past seven years, worked to implement a series of budgets and accounting reforms in Ethiopia’s public finance system. As an intern with DSA, I traveled throughout Ethiopia to interview staff members of local government finance offices and assess their progress in implementing reforms.

I flew to Addis Ababa at the beginning of the summer with little idea of what would be in store for me. Despite having studied development theories about institutional change and government transparency and accountability during my first year at the Kennedy School, I had only a vague notion of what these concepts actually look like in practice. How does the government actually operate in the far reaches of Ethiopia, hundreds of miles away from the capital? When roads are unpaved and electricity is available only sporadically or not at all, how do people go about the business of public administration? Where do local government offices keep their money when the nearest bank is six hours away by donkey?

The most remote of the places I visited, Afar posed many challenges to reformers. In the regional capital, Assaita, accountants work in a cramped office with crumbling plaster walls and an air conditioner that generates more sound than cool air. Because of the intense heat, the office shuts down for four hours every afternoon. Some of the rooms go without light, while others work with just a solitary light bulb. Under these conditions, it was hard for me to imagine how a government can function on the most basic level, much less implement a series of sweeping reforms.

Yet the government does run, and somehow reform is possible. Progress takes time, but it does come. That’s what I learned when I visited Awassa, the capital of the Southern Region, which has been the most successful of all the regions in reforming. Within a week of my arrival in Ethiopia, I attended a graduation of accountants from the Southern Region who had just completed training in accounts reform introduced by DSA. Although I didn’t understand a word of Amharic, I could tell during the ceremony that the men and women were proud of their achievement. One young man wore a new three-piece suit for the occasion. Another brought his family. Almost everyone stayed afterward to eat, drink, and celebrate. 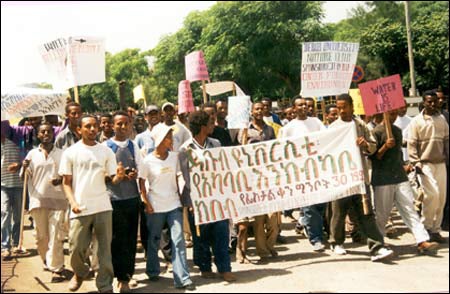 At the time, I didn’t fully appreciate the extent of their accomplishment. Not until later in the summer, when I visited Afar and other regions, did I come to understand better the numerous challenges that the team of government officials in the Southern Region must have faced in order to make positive change. I often come back to that image of their graduation. I want to recall their success and remind myself that change is possible – even in a place like Afar.

Pamela Young will receive a master’s degree in public policy from the Kennedy School in June 2004.