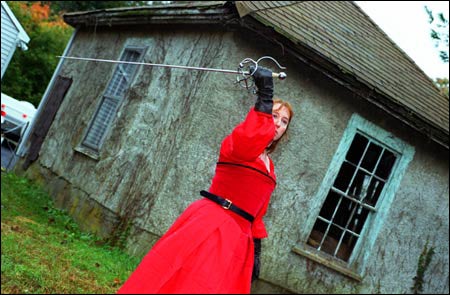 When Veronica Fullard performed at her first Renaissance festival, she hid behind a camera snapping publicity photos (in character, of course, with an innovative back story to explain her “portrait-taking device”) to minimize her interaction with patrons. “I used to be the most horribly shy person I knew,” says Fullard, who is a staff assistant in the Department of Philosophy. “Five years ago, if you had asked me, I never would have guessed that I would be so immersed in this.”

Four years after her debut, Fullard no longer needs a prop for cover. She performs with Pastimes, a historically oriented interactive theater company that stages several weekend-long Renaissance “faires” each year. She’s kept the keys to Robin Hood’s castle, protected the Holy Grail as a maiden in a King Arthur legend, and been one of Henry VIII’s daughters.

Her favorite role so far, however, has been Storm, a rapier-wielding female assassinator in the Three Musketeers Faire. Fullard learned to fight early in her faire career and now loves it, despite the extra rehearsal hours it demands. “If somebody misses a line, it’s not going to hurt anybody else,” she explains. “But if somebody doesn’t know what they’re doing in a fight, you’re putting somebody else in risk.”

Although Pastimes boasts nearly as many female fighters as male, Fullard acknowledges the anachronism. “Women fighting, historically speaking, would not have been so realistic,” she says. “In a lot of ways, these faires are part fantasy. It makes it more exciting for the audience, and for the players, too.”

For all her passion for acting in Renaissance faires, Fullard plants her feet squarely in the 21st century and has no delusions that she’s visiting a rosier time. “There was crap in the streets and bad smells and people didn’t bathe and women were secondary citizens,” she says. “It’s very glamorized in the faires. We take the fantasy and the fun and the adventure but leave behind all the things that actually made it miserable to live in that time and place.”

Still, this formerly shy teenager who had just one acting credit – a high school play – on her resumé before joining the 16th century finds the fantasy fulfilling. “It’s the scenes, it’s the fighting, it’s interacting with patrons,” she says. “It’s knowing at the end that you entertained a whole lot of people, by making them love you or making them hate you or making them afraid of you. If you did it well, it’s such a good feeling.”