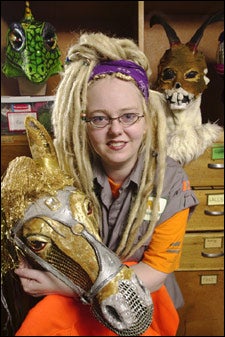 This is my fourth season on staff as craft artisan at the ART [American Repertory Theatre]. There are three areas of costuming that are my responsibility: craftwork, fabric painting/dyeing, and distressing.

“Craftwork” means I’m responsible for the creation of costume pieces that are not clothing: jewelry, hats, masks, wings, animal heads, sword belts, you name it.

“Fabric painting and dyeing” is pretty self-explanatory; I customize fabric yardage that the costume shop then makes into clothing, dye it a requested color, and paint or stencil patterns onto it.

“Distressing” is the art of aging garments. Say the shop makes a tailored coat, and the character wearing it is a man who was once wealthy, but has fallen on hard times. Obviously, he wouldn’t have a brand-new, fitted coat. Using tools like sanding blocks, scalpels, aerosol paint sprayers, and rasps, I break down new garments to look old and lived-in. I’ll fill up the pockets with rocks and soak the garment down with water, so that it dries with the pockets all bagged out. I’ll mist the shoulders with bleach or a light shade of fabric paint so it looks like someone’s been wearing a coat outside and the sun has faded it. I’ll soak pant hems in dye so it appears the character has been slogging through rain.

For “Marat/Sade” two seasons ago, all the characters were insane asylum inmates who’d been wearing the same uniform for years. The designer made up a chart of who needed what stains. One character banged his head on the wall a lot and had nosebleeds down his front, another smeared food on himself at mealtimes, a third was incontinent and peed in her pants. I’m probably one of the few people on earth who gets a memo from her boss saying, “More pee stains in Hannah’s pants.”

My job is a great deal of fun, but it’s actually more satisfying in terms of its potential for collaborative creation. At work, I’m called upon to use my creativity in tandem with others, to create a product that’s the result of dozens or a hundred people’s creativity combined.

If it’s a new staging, it’s exciting because it’s a play that no one has ever done before; we get to make it live for the first time. We can even talk to the playwright or composer, find out his or her input on the nuances of the script. At ART I’ve worked on six world-premiere stagings, which is a privilege I wouldn’t enjoy at most other theaters of our size and scope.

If it’s a classic being staged, it’s even more complicated, in a sense. We’re making something that’s been around since Shakespeare’s time, or since Molière or Aristophanes. Hundreds of years and thousands of productions have gone past, and here we are making a new one out of our own talents and interpretations. I like to think about life as a tapestry, and it’s things like this that make me think theater is a fiber that runs through the most basic warp and weft of [our lives]. It connects us all, and it’s amazing to be a part of that every day of my life.

Seeing a show as amazing as last season’s “Sound of a Voice” and thinking to myself “I painted that kimono,” then being swept away by the script and the actors’ characterizations, by the music and the little details of the scenery and props … that’s about being a part of a community, a creative community that’s made something wonderful. I saw that show three times.