By Olga Solomita Special to the Gazette 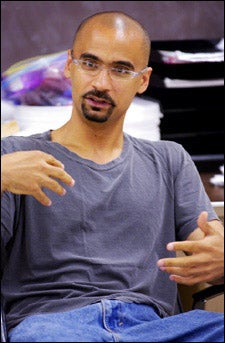 “Why is the story written in fragments?”

Junot Diaz, author of the novel “Drown,” weighs the question posed by Tatia Gared, a student of the Cambridge Harvard Summer Academy Summer School Program at Cambridge Rindge and Latin School. Diaz, a professor of creative writing at the Massachusetts Institute of Technology, was invited by the academy students to speak about his novel after the world literature class had read six of the 12 chapters in his book.

“The kids were so excited by his book. At least half the class has gone on to read the next six chapters,” said Jeff Anderson, mentor teacher. Anderson emphasized that this is significant because this collaboration between Harvard and Cambridge Rindge and Latin is for eighth- to 12th-graders who have failed English, “reluctant readers,” who truly connected to Diaz’s “edgy, controversial” prose.

“The Graduate School of Education [GSE] interns and myself are grateful for Junot’s generosity,” Anderson said. “I e-mailed him several times. When he wrote back, he wanted to know about the kids. ‘What kind of kids are they? What kind of program is it?’ When he agreed to come, the kids came up with their own questions regarding the text and also his life.”

Diaz turns the question back to the student. “Well, what did you think? Why fragments? Did you like it? I break it up into little pieces and never stay in the same time, always jumping around. I get bored telling the story a, b, c, and d. My mind works that way. How do you guys remember things?”

Diaz, who had developed an instant rapport with the class, lifts his hand and gently gestures toward his audience. His soft eyes circle the room and he sits sunken back, his legs stretched out before him in youthful repose. This youthfulness is contrasted by a professorial goatee. His outward manner and appearance seem to signal an inner balance. Patiently, he waits, as the students absorb the question.

A student asks Diaz why he omitted quotation marks in “Drown.” Diaz again turns the question around. “What happens when you get rid of them? I wanted to have parts where you can’t tell if somebody thinks or speaks. That’s the way memory is. I wanted to confuse that.”

“In the GSE, we are learning to use culturally relevant material in the classroom, so that we can first engage students and use it as a bridge to other materials that they may not have been interested in before,” said GSE intern Nicole Ceccacci. “Junot Diaz’s work includes many issues that these kids experience firsthand, issues around immigration, language barriers, poverty.”

As Diaz speaks, Ceccacci and the two other interns in the classroom, Leslie Rubin and Lizzie Torres, are spread out among their charges in the circle of seats. All three had been working quietly with students before Diaz’s arrival. Every now and then they whisper to a student seated close by, seemingly giving a word of encouragement to ask their prepared question.

“In the GSE we look at many perspectives. We read about issues the kids deal with – issues of power, cultural assumptions – and we reflect on our own experience to strengthen our work in the classroom,” said Torres. “Diaz deals with these issues, too. That is why his work is so important.”

As a teacher Diaz is a natural. He shared details of his own schooling, saying that in one year of high school he missed 90 of the prescribed 180 days. Diaz’s family emigrated from the Dominican Republic to New Jersey, to a neighborhood that was primarily African-American and Puerto Rican. There were no more than 20 Dominican families. He lived near one of the largest landfills in the country, “a mountain of garbage on fire, covered with birds. I would wake up every morning smelling burning garbage. Coming from this place no one would imagine I would be writing. I was a pissed-off kid of color thinking people hate us. They all have more than me.”

Diaz went on to explain that for him, high school was not a priority. He spoke about how early on, when he was a child, he was still very innocent, but as he grew older, he was forced to let go of this innocence. He described the process as acting out the “code of being a man, of being tough. It was not so much what you were, but what you weren’t. At 13 you got to show what you got.”

“‘Drown,'” he said, “is a how-to guide of how a boy gets to be made. I didn’t like my teenage years. I felt like I was drowning.” Hence, the title.

One of the students asked Diaz if during these years he had had any role models. “I didn’t think I had one. But I had this older African-American sister in the neighborhood. She would go to college during the week and come home on the weekends to help her mother. She would bring me aside – she was 6-foot-3, played ball for Rutgers – she’d pull me aside and say, ‘you need to think about college.’ She would bring me college applications and show me pictures. She was going to Europe. She looked like she was having a good time. College looked nice and lovely. I think of her and I think of my mother.”

Diaz’s words to describe his mother, his role model, were poetic, reverent, and as sharp as the machete she had used to harvest watermelon in the fields of Santo Domingo. “I blew my high school graduation extra lovely. Mom went by herself to get my diploma.”

Not long after, she gave Diaz an ultimatum. “Either you take night classes or I throw you out.” Late that night she packed all his belongings. “Mom would smack the taste right out of my mouth. The next morning I enrolled in community college.”

Diaz went on to describe his first college experience as a “cake walk” compared with surviving his neighborhood and his high school years. “I was going to classes 15 hours a week as compared to the eight hours a day I did in high school. There were tons of girls running around. I had a chance to travel. I enjoyed it so much.”

After spending time at the community college, Diaz transferred to Rutgers and “never looked back.” He highly recommended college to the students. He asked them if the school took groups to see college campuses. “You gotta see this cause you’ll never believe it. … You’ll learn so much wild stuff. Get your ass into a community college and transfer into a better one.”

While Diaz was clear with the students about the importance and advantages of his college experience, he was just as clear about that specific aspect of himself that enabled him to be successful in his work as an artist, his ability to tell stories. “One thing that is useful is the desire to make art … I could tell stories. If you’re good at anything that doesn’t have to do with school, or a job, it can save your life.”

Diaz is currently working on his second novel, titled “The Brief Wondrous Life of Oscar Wow.” “The main character is a big fat Dominican kid and all he wanted was to fall in love. We all need a little extra love. The larger you want it, the bigger it hits.”