Drawing on injustice: Leedell Bean reaches out in pen and ink 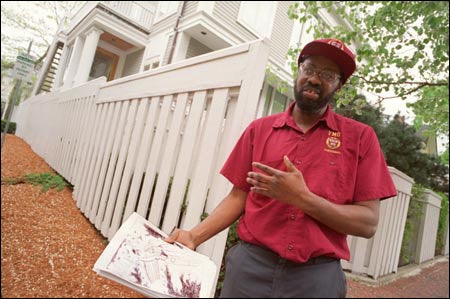 Drawing for Leedell Bean is a way out of a world that is sometimes cruel when caring is needed.

On the pages of his notebooks he creates characters who defend the weak, who save those in danger and who, if this world were just, would leap off the page to lend a hand in Harvard Square.

Most nights, Bean finishes his work as a custodian for Facilities Maintenance Operations and goes home to his Cambridge apartment, where he rewards himself by sitting and drawing the fantastic characters that people his comic books.

Bean, 44, began drawing comic books a couple of years ago as an unexpected outlet for his anger at the prejudice and cruelty he meets because of his cerebral palsy. The condition has left him with a noticeable limp that he says draws stares and the occasional unkind comment.

One day in 2001, he said, he overheard someone say to a companion as Bean passed by that all handicapped people should be destroyed. Bean said that comment so angered him that he went home and began drawing – something he’d never tried before.

“It was to relieve the anger. Instead of throwing things, I sat down to draw. I never knew I could draw like that,” Bean said.

Bean, who began working at Harvard in 1981, said he hasn’t attempted to get his work published, though he is in the process of copyrighting one of his completed books, about a sort of avenging angel who uses fire to help people.

His other characters – he’s drawn and written more than 20 comic books in the past two years – include his fire angel, fantastic humanoids, and vampires. Some characters are good, some are not, but most, like the rest of us, are struggling with some sort of challenge.

Despite the challenges that go with living with cerebral palsy, Bean is reaching out himself, perhaps doing some of his characters’ work, in Harvard Square. Each week, he volunteers at an area homeless shelter to help those less fortunate than him.

“I figure I want to give back to the community in Cambridge,” Bean said. “So that’s what I do.”