HUPD's Rape Aggression Defense Program, or RAD, is part of a national program that aims to empower women through self-defense

Shouting in unison, the women gathered in an empty Gund Hall room to kick, punch, and shout in explosive, carefully choreographed moves, as if rehearsing some sort of angry, punk-rock chorus line.

“Is anybody nervous for next week?” asks the group’s leader, Julie Davie. “Try to eat a small lunch; it’s a big physical day.” 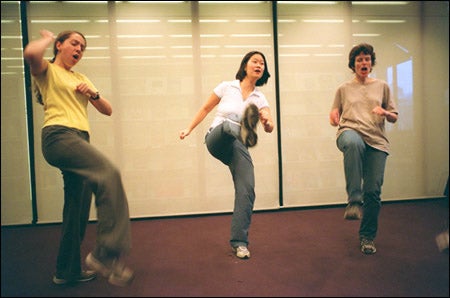 Davie is a Harvard University police officer, not a dance teacher, and the women she’s coaching aren’t performing for an audience, they’re discovering their own power through Harvard University Police Department’s (HUPD) Rape Aggression Defense Program, or RAD.

A national program that aims to empower women through self-defense, RAD is offered to female Harvard students, faculty, and staff through HUPD. Based on the four principles of education, dependency on self, making one’s own decisions, and realization of one’s power, RAD teaches women to defend themselves against assault with easy, effective moves borrowed from martial arts.

Indeed, in the third of the four classes, RAD students learn what Davie calls “ground defenses”: How to escape from an attacker (actually HUPD Sergeant Brian Lakin, wearing a protective “diaper”) who pins the victim to the ground. Carefully following Davie’s instruction, the women in the course – many of them weighing half Lakin’s 230 pounds – throw him off them, surprising themselves with their new-found power.

“It’s all physics,” says Davie, watching her charges neatly escape from Lakin’s grip. “It’s all the strength they gave us down here,” she adds, patting her hips.

The course culminates in videotaped simulations of real attacks by heavily padded HUPD officers, giving women an opportunity to test themselves in a situation as real as safe practices will allow.

Davie acknowledges the students’ apprehension about the simulation but assures them that their training will serve them during the class and, if ever needed, in a real attack situation. 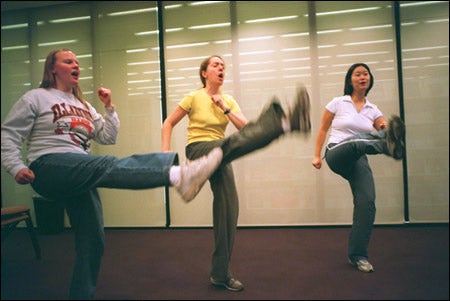 Despite the controlled circumstances, the simulation is real enough for the participants. The mock attackers “use threatening language and walk in a threatening way,” says RAD participant Lydia Carmosino, Verdine Lab administrator in the Chemistry Department. “You know he’s a police officer, but in the simulation, all you can think about is ‘How can I get away from this bastard?'”

Carmosino gives the course high marks for boosting her confidence at her ability to defend herself and teaching her, above all, to avoid situations where she might be attacked. An added benefit of the course and an enhancement to her personal safety, she says, was getting to know Davie, Lakin, and some of the other HUPD officers who helped teach.

“I was very impressed by the accessibility and candor of these officers,” she says. “These individuals are extremely professional, informed, and very interested in protecting this community.”

For more information on RAD, go to www.hupd.harvard.edu/prevention_defense.php. HUPD offers RAD free of charge to any female affiliate of Harvard University.