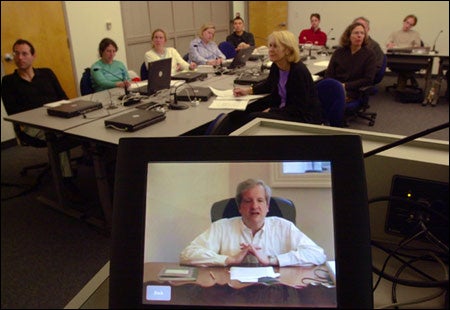 “What would be the opposite of social justice?” Gregory Nagy asked his Extension School Introduction to Greek Literature class last Thursday (May 1) evening.

“Hubris?” came the answer from one of the students sitting at tables arranged in a horseshoe with the open end facing the front of the room.

“Yes, very good,” Nagy replied before continuing his lecture about the cult of the hero.

It might have been an ordinary exchange between student and professor, except the professor wasn’t there.

Nagy, Francis Jones Professor of Classical Greek Literature and professor of comparative literature, wasn’t being imagined either. Instead, he was sitting in front of a camera in his office in Washington, D.C., where he directs the Harvard Center for Hellenic Studies. In a new twist on the usual distance education model of far-flung students engaged in courses at a central location, the classics class is experimenting by bringing the instructor from a distant location into the classroom.

“My first impression of the class was that it’s pretty amazing, being here and him being there and to feel like you’re really not in two different places,” said Karen Reed, a master’s degree student at the Extension School.

“Another student said it’s a little like having God in the room,” said student David Roazen, referring to Nagy’s giant image projected on a screen at the front. “It’s been as close as you can get [to Nagy being in the room]. I think the fact he’s not here has prompted him to provide us with a pretty comprehensive Web site that I find invaluable.”

The class is just the latest expansion of technology in learning at the Harvard Extension School, which has been regularly increasing its offering of distance education courses. Director of Distance and Innovative Education Len Evenchik said that while technology is critical to the success of the class, the goal is to make it as invisible as possible.

The class takes place in the Extension School’s high-technology classroom in the basement of 53 Church St. The room has two large screens at the front, and projectors and cameras protruding from the ceiling and hanging off the walls.

Each of the classroom’s 31 seats is equipped with a laptop computer and a microphone. To run the whole affair, a videographer sits in a small room next door, behind a glass window and in front of a panel of monitors. From that room, the videographer operates the room’s four cameras and can zoom in on a student asking a question, for example. The image is displayed on a monitor in Nagy’s office in Washington, D.C.

The use of multiple cameras with the ability to focus on individual students means that Nagy can do more than just hear students ask questions or see a fixed wide-angle view of the class. Being able to see individual students allows Nagy to read their expressions even as he fields their questions, restoring an important interpersonal communication lost in some distance education setups.

Though the room is high-tech, the class’ subject is not. The students, for example, don’t open the laptops in front of them. Most take notes on paper with low-tech pens. Once into the lesson, Nagy’s topics are Greek heroes, their importance to communities, their journeys, and their differences from Greek gods.

“We go through a lot of effort for the technology to appear invisible,” Evenchik said.

Nagy said the experience has been better than he expected. He said he feels more connected to students than he thought he would, and he believes the technology that augments his lectures has created a good learning environment for the students, not just a good distance learning environment.

Nagy’s image is brought to the classroom over the Internet. He controls not just what he says but, through a laptop in Washington, D.C., also what students view on a second large screen to the left of the one with his image. On Thursday, he had projected there several passages dealing with different aspects of his lecture material. Once or twice, the passage he was talking about wasn’t visible, but the students alerted him and he quickly adjusted to bring it into view.

Critical to the whole operation is Kevin McGrath, an associate of the Department of Sanskrit and Indian Studies, who backs Nagy up and provides an instructor’s physical presence in the class. Despite the careful planning, technical glitches have cropped up, and McGrath filled in for Nagy recently during part of a class when the link to Washington, D.C., went down.

McGrath said he’s been amazed at how well the class has worked, but said Nagy has a reputation for being on the cutting edge of using technology in education.

“It’s worked extremely well. I’m quite amazed,” McGrath said. “I don’t see any difference at all. It’s as if the professor is in the classroom.”