The ‘ethical strategies’ of novels: 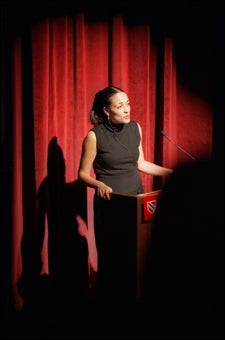 To an SRO crowd at the Agassiz Theater, Radcliffe Fellow and award-winning novelist Zadie Smith discusses ‘The Morality of the Novel,’ the subject of a new book of essays she’s working on while at the Radcliffe Institute. (Staff photo by Stephanie Mitchell)
As the Radcliffe Institute for Advanced Study continues to focus its identity as a center “dedicated to advancing knowledge at its outermost limits,” it couldn’t have picked a better poster girl than novelist Zadie Smith, a Radcliffe Fellow and the final speaker in the Institute’s Dean’s Lecture Series Monday (April 14). Smith, the celebrated young British author of “White Teeth” and “Autograph Man,” has stretched her own literary boundaries this year, spending her time at Radcliffe working not on fiction but on a collection of essays about the morality of the novel.

Her densely theoretical talk, trimmed, she said, from its original three-hour length, looked closely at E.M. Forster’s “A Room With a View,” comparing its morality to that of Jane Austen and dipping into the writings of novelist Iris Murdoch and philosophers Martha Nussbaum and Aristotle.

“We believe certain styles symptomatic of certain ethical attitudes,” said Smith about the traditional notion that simple styles prescribe morals and stylistically complex novels are amoral. “The truth is that every variety of literary style attempts to enact in us a way of seeing or reading, and that this is never less than an ethical strategy.”

No stranger to working in a university setting, Smith completed her acclaimed first novel, “White Teeth,” while a student at Cambridge University; its publishing in 2000 propelled her to international fame and literary “‘it’ girl” status. “White Teeth” won the Whitbread First Novel Award, the James Tait Black Memorial Prize for Fiction, and the Commonwealth Writers’ First Book Award. Her sophomore effort, “Autograph Man,” was long-listed for the 2002 Booker Prize.

Smith’s star power drew a capacity crowd to Radcliffe’s Agassiz Theatre, one younger and more colorful than attracted by many Institute events. Smith, 27, turned her back on her peers’ suspicion of novels that might make the reader feel good.

“My generation liked to be in some pain when they read. The harder it is, the more good we believe it is doing us,” she said.

Pride, prejudice, and a room with a view

With her clearly motivated characters and titles like “Pride and Prejudice” and “Sense and Sensibility,” Jane Austen attracts moral philosophers “partly because she wears her ethics of reading on her sleeve,” said Smith, suggesting that her novels and characters provide moral sound bites for readers.

Yet Smith cautioned against such a reading of Austen in which “the novel is dealt with only in piecemeal fashion, a character here, a conversation there, like doctors removing discrete organs from the corpse of the novel for later insertion into the healthy body of moral philosophy,” she said.

“They don’t know what they want or how to get it,” said Smith. “Forster’s people wouldn’t stand a chance against Austen’s protagonists.”

Forster’s narrative structure, too, is muddled; it’s often criticized for being impulsive and meandering. Yet this was not accidental, said Smith.

“Forster himself was conscious of the connection between the style and the ethics in interesting ways,” she said. “He felt his infamous muddles had value, and that the more controlled, clear, Austen-like elements of his style were actually ethically problematic.”

Smith offered an inquiry into the dual novels of Forster’s “A Room With a View”: Forster’s novel itself, and “Under a Loggia,” the novel his character Miss Lavish is writing in the book. While both novels concern the love life of Lucy Honeychurch, Forster’s is a success and Miss Lavish’s an abject failure. Forster convinces the reader that Miss Lavish’s book is not only bad, but also unethical.

“It’s a novel Forster’s own novel dreads being,” said Smith, adding that Miss Lavish’s ethical failure as a person, her vulgarity of self-assertion, is one with her literary failure.

“Miss Lavish is a bad novelist and an unpleasant person exactly because she is unable to process what Nussbaum calls ‘new, unanticipated features,'” said Smith. Aristotle, she continued, compared this quality to that of a doctor who adheres to his textbook training so fiercely that he is unprepared for the variety of medical experiences he will confront.

The good that novels do

Smith embraces Forster’s ethical stance; her own “flag,” she said, would proclaim, “When we read with fine attention, we find ourselves caring about people who are various and not quite like us. (And this is good.)”

The novel does a poor job of prescribing pat morals or answering the Aristotelian question of “How does one live?” Even texts that do so, such as fairy tales, some of the Bible, self-help books, and lesser literary novels, are not entirely successful at closing themselves off to more problematic ethical inquiry.

“It seems that if you put people on paper and move them through time, you cannot help but talk about ethics, because the ethical realm exists nowhere if not here,” she said.

“It’s something we know as readers of novels and readers of our own lives: It is this deep, experiential understanding of the bond between the ethical realm and the narrative act that we find crystallized in that too-familiar homily, ‘two sides to every story,'” she concluded. “This is the good that novels do, and the good that they are.”