In a rare U.S. public appearance, North Korea’s ambassador to the United Nations, Song Ryol Han, repeated his nation’s call for bilateral talks with the United States over North Korea’s nuclear program and said that the Iraq war has heightened North Korean fears of American aggression.

The remarks, made at a Harvard conference on the North Korean nuclear crisis on Thursday (April 10), accompanied concerns voiced by authorities on the region that tensions on the peninsula were higher than anytime since the Korean War.

“I have never been as concerned about the situation on the Korean Peninsula as I am today,” said Don Oberdorfer, adjunct professor of international relations at Johns Hopkins University’s Nitze School of Advanced International Studies.

Oberdorfer and Han, who is the deputy permanent representative of North Korea’s mission to the UN, were part of the morning keynote panel discussion for the conference. Called “Resolving the Korean Crisis: Voices of the Region,” the conference was sponsored by Harvard’s Korea Institute, The Korea Society in New York, and the Harvard Project for Asian and International Relations.

The daylong event, held at the Charles Hotel, also featured panels presenting views of the crisis from South Korea, China, Japan, and Russia.

The conference was designed to present views of the crisis from other nations interested in the Korean Peninsula, according to Korea Institute Director Carter Eckert. In opening comments, Eckert said there have been several conferences on the Korea crisis, but mostly from the American point of view. This conference, he said, would examine issues from the point of view of people and governments in the Korean region.

“We live in unsettling and troubling times. Unresolved issues on the Korean Peninsula threaten to fester and grow,” Eckert said.

Oberdorfer set the stage by reviewing recent developments, including the U.S. assertions last fall that North Korea was pursuing a nuclear weapons program in violation of agreements made in 1994. Under those agreements, North Korea stopped its nuclear program in exchange for U.S. shipments of heavy fuel oil and for help building light-water nuclear reactors for energy generation.

North Korea’s response to American accusations was that it was entitled to have nuclear programs. It called on the United States to sign a nonaggression treaty, recognize North Korea’s sovereignty, and stop interfering with North Korea’s international economic programs.

Instead, the United States stepped up pressure on North Korea, Oberdorfer said, resulting in North Korea restarting the mothballed reactor from which it could extract nuclear weapons materials. North Korea then kicked out international inspectors, withdrew from the Nuclear Nonproliferation Treaty, and moved nuclear material to sites in the country where it could be processed into weapons material. 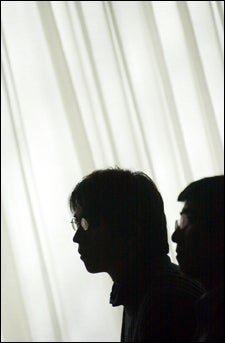 Given the extreme portability of plutonium – just three pounds is needed to build a nuclear bomb – and the international concern about such weapons falling into terrorist hands, Oberdorfer said it was an extremely dangerous time on the Korean Peninsula.

“If North Korea begins producing plutonium by separating spent fuel rods into plutonium elements, I don’t believe this U.S. government or any U.S. government could possibly sit by,” Oberdorfer said. “That the stuff would be sold internationally is a nightmare.”

Heightening the danger, Oberdorfer said, is the presence of the huge North Korean army and the North Korean government’s assertions that it would not sit idly by if the country were attacked.

“They have taken President Bush’s doctrine of pre-emption and adopted it as their own,” Oberdorfer said.

In his comments, North Korean Ambassador Han declined to provide specifics of the North Korean nuclear program, and instead reiterated the country’s claims that fears of U.S. aggression were driving events on the peninsula.

Han said the nuclear program is being driven by a severe energy shortage in North Korea, saying that only the foundations have been laid for light-water nuclear reactors promised by the United States to resolve the last Korean nuclear crisis, in 1994.

“Satellite photos show the northern part of the Korean Peninsula has no lights and shows a very serious electricity shortage,” Han said. “The DPRK [Democratic People’s Republic of Korea] was deceived and betrayed [in the 1994 agreement].”

Han cited U.S. President Bush’s inclusion of North Korea in the “axis of evil” as a sign of the increased threat to North Korea from the United States. He said meaningful dialogue between the two governments ceased at the end of the Clinton administration and the Bush administration’s unwillingness to talk has just increased anxiety in North Korea.

Han said bilateral talks between the United States and North Korea would immediately ease tensions. He also called for an end to U.S. interference with North Korea’s economy.

A hopeful factor, Ilitchev said, is that neither the United States, North Korea, nor any of the neighboring nations wants to see the crisis escalate to a military conflict.

“The U.S. and the DPRK do not want a war. They do not want any military conflict to take place,” Ilitchev said. “We hope all of us together will turn this crisis into an opportunity.”