In a nondescript classroom above Somerville’s Union Square, 10 teenagers are flipping through photographs they took.

“I tried to show the union of two countries,” says Talyta Morais, 14, who, like her classmates, is a recent immigrant from Brazil. She looks carefully at her photo, of two clasped hands, one painted with an American flag, the other painted in Brazil’s green and yellow national symbol. “See how the Brazil side is a little tanner and the United States is the lighter arm?”

Fifteen-year-old Polyanne Veloso shows a photo of a landscape. “I took this picture because if you look at it, the lines in the middle of the road take you to the end of the picture. They really draw your attention,” she says. “You want to see where they’re going.” 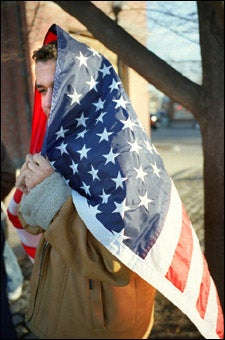 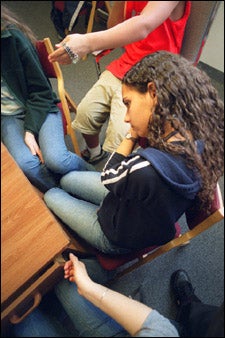 Rafael Santana wears an American flag as part of Kulcsar’s assignment exploring the intersection of Brazilian and American culture. Polyanne Veloso listens carefully as the group engages in a lively discussion about a catalog for the upcoming show of student work at the Rockefeller Center.

Clearly, this is no yearbook meeting. And although the photos were all taken with simple point-and-shoot cameras, they go far beyond snapshots.

Morais, Veloso, and their classmates are learning visual literacy and exploring their own identity as immigrants with João Kulcsar, visiting from Brazil as a Fulbright scholar at the Harvard Graduate School of Education this year. While Kulcsar’s primary focus as a Fulbright scholar is his own research in education and media literacy, teaching this photography course at the Massachusetts Association of Portuguese Speakers (MAPS) has become his passion.

Surprised at the size of Massachusetts’ Brazilian community – there are 200,000 Brazilians in the state – Kulcsar was eager to get involved. In Brazil, he splits his time between teaching at Serac Fine Arts College in Sao Paolo and working with low-income youth in a variety of visual and creative arts programs.

“I have to give something back to the community,” he says. “This is one obligation of the academy: to exchange.”

What’s more, his wife and daughter could not join him for his year in Cambridge as originally planned, so Kulcsar found himself with time on his hands. A meeting with the Brazilian consulate led him to MAPS, a nonprofit organization that provides services to Portuguese speakers in the state, where he has taught this course as a volunteer since October.

While the students’ medium is photography, the course is not, Kulcsar emphasizes, simply lessons in taking good pictures.

“The idea is more to develop this visual literacy, to understand how the image is constructed,” he says, adding that most information today comes from images. “The image is not true, it’s your opinion. When I take a picture, it is my truth, it’s not the truth.”

As the students sift through their recently developed photos, they eye them critically, selecting the best for an exhibit at Harvard’s upcoming Brazil Week (see box).

Caroline Cafer, 14, chimes in. “We think about why we’re taking the picture, we don’t just press and click,” she says.

Kulcsar, who’s titled the course and the exhibit “Identity: Ruptures and Permanencies,” encourages the students to explore issues of cultural identity and immigration in their photos. Their discussions are thoughtful and passionate beyond their years; Kulcsar believes that their identity as recent immigrants has honed their ability to think critically about visual media.

“The environment for them is difficult,” he says, as the students pipe in with stories of being outcast at school. “I think this difficulty can create a very strong personality.”

Kulcsar urges Veloso to pull out the photo she plans to exhibit. Against a torso wearing a white sweater, two hands are linked by the thumbs, bird-like.

“This picture was a way I found of showing what I feel because I want a world with much peace and unity,” she says, as shy as she is proud. “The white would signify peace and my hand was like a dove.”

Looking over her shoulder, Kulcsar is all pride. “She wanted to take a picture of a dove, but we couldn’t find any,” he says. “I think she found a better way.”