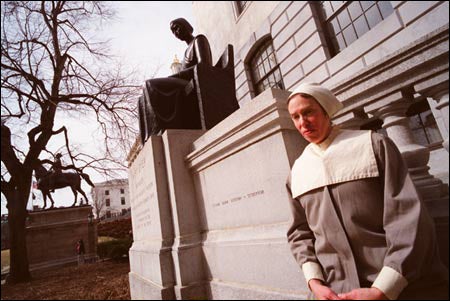 This is Mary Dyer’s last day on Earth. Next morning, she will be hanged from the great elm on Boston Common for the crime of being a Quaker. She does not fear death. In fact, this is the third time she has returned to Boston from the more tolerant colony of Rhode Island for the express purpose of testing the Puritan authorities’ law against heresy. The first two times she was granted a reprieve. This time the authorities have been less lenient.

They mean to make her an example, to show what happens to people who follow their “Inner Light” rather than the teaching of the clergymen whom God has ordained as their leaders.

But they can little imagine what events will be triggered by her sacrifice. Edward Wanton, Mary’s executioner, horrified by what he has done, will exclaim, “We are killing the Lord’s people!” He will flee Boston, join the Quakers, and help found the Quaker meeting house at Pembroke. Six months later, King Charles II will repeal the law banishing Quakers from Massachusetts, and in another three years, in 1663, he will sign the Royal Charter of Rhode Island ensuring freedom of religion. It is a document that is the direct ancestor of the U.S. Bill of Rights.

Now in the 21st century, Mary Dyer has been brought back to life through the efforts of Jessa Piaia, researcher, writer, and actress, who also works part-time as a staff assistant in the Anthropology Department. Clutching a Bible against her plain gray gown, she becomes the conscience-driven Dyer. In somber, measured tones, she tells the story of Dyer’s transformation from obedient wife and mother to a woman who dares all for religious freedom.

“This is my passion,” she says. “I’ve always been interested in people’s life stories. Their struggles and accomplishments are inspiring to me, and I think they can be a source of inspiration to others.”