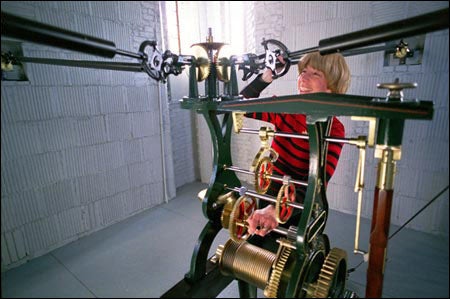 Sandy Selesky’s idea of fun is spending hours on her hands and knees, inching toward a covey of terns or sandpipers in the hope of snapping a few shots with her Nikon before they scatter and regroup farther down the beach.

She has received numerous awards, exhibited her work in local galleries, and published her photos and articles in both local and national publications. When she is not out patrolling the sand dunes or creeping through tropical underbrush, she serves as building manager for Busch Hall, home of the Minda de Gunzburg Center for European Studies.

A glance around her Busch Hall office gives some hint of her avian interests. The walls and shelves are full of bird photos – owls, woodpeckers, puffins, flamingos. One whole section is devoted to Selesky’s pet birds – her gold-capped conures, her green singing finches, and her late, lamented parakeet Fritzy who could utter phrases in German, French, and English. She and her husband share their home with 13 birds at present and have had as many as 25.

“My grandmother gave me a parakeet when I was 8,” she says. “That’s what started me on my love of birds.”

Selesky’s interest in photography began about 30 years ago when she learned to develop and print her own black-and-white pictures. Over the years, the two interests have come together and become one. Currently president of the Nashoba Valley Photography Club, she regularly enters her work in club contests.

“I love the competition. It inspires me to get better.”

Selesky’s husband Don, a software developer, shares her interest in wildlife photography and is a fellow member of the club.

“Yes, we often compete against each other,” Selesky says. “I’m a little ahead of him right now, I have to say.”

While her Harvard job does not offer the thrill of stalking an elusive warbler or seeing migrating snow geese flying in formation across the sky, it does provide satisfactions of its own. Selesky enjoys maintaining the elegant old building with its carved stone faces, its four-sided mechanical clock (which she calibrates by hand), and its sheltered courtyard presided over by Henry the bronze lion. In fact, she has made many improvements in her 13 years as manager, including transforming the courtyard into a more inviting refuge with lush roses and a working fountain.

But for sheer excitement and the kind of consuming experience that dissolves all cares and troubles, Selesky would rather be outdoors with a camera in her hands than almost anywhere else.

“My passion for birds and for photography hasn’t faded over the years. If anything, it’s increased.”