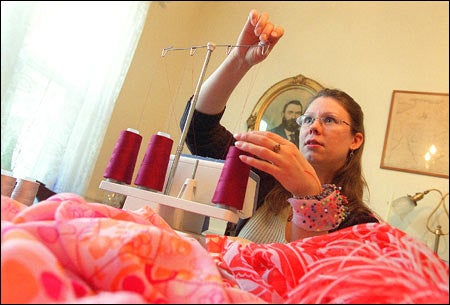 Lisa Simpson designs and makes costumes for the Gold Dust Orphans, a theater company that puts on plays with titles such as “Joan of Arkansas,” “Scarrie” (with apologies to Stephen King), “Joan Crawford’s Christmas on the Pole,” and the group’s newest offering, “The Ebonic Woman.”

Strictly speaking, this isn’t drag queen theater, since there are women in the cast. They tend not to get the leading female roles, however.

During the summer, the Orphans camp it up in P-Town, and in the fall they move their raunchy, irreverent productions (masterminded by writer/actor/director Ryan Landry) to a bar near Fenway Park for what might be called “Happy Hour Theatre.”

How did a nice financial aid assistant who spends her days in Byerly Hall straightening out problems for anxious graduate students get involved with this lot?

It all started in childhood when Simpson discovered her grandmother’s stash of old clothes and jewelry and started playing dress-up, but it was some time before she acquired the necessary skill to create costumes of her own.

“I did horribly in home economics, so I certainly didn’t learn to sew there. I made my own clothes all through high school, trying to follow commercial patterns. I just couldn’t wear them out of the house. But I kept at it, I was very persistent, and eventually I got better.”

By her 20s she was good enough to impress a local theater director who put her to work making costumes for “Guys and Dolls.”

“That was the first time I realized making costumes was a real job. It’s unlikely I’ll ever make a living at it, but it’s very satisfying.”

Much of her satisfaction comes from the creative freedom she enjoys.

“Often Ryan will have an idea for a costume, and he’ll say, ‘make me something fabulous,’ and I’ll take his idea and run with it. So far, I haven’t heard any complaints.”

Sometimes, “fabulous” seems too tame a word to describe Simpson’s creations, like the chapeau she made for a production of “Camille” that featured an enormous bird’s nest topped by a stuffed crow. Other costumes may be deliberately drab, like the Pilgrim’s outfit she made for Scarrie’s repressed mom.

In addition to her costume work, Simpson manages a local rock band called “Run for Cover” that plays original tunes and covers in a bluesy, contemporary vein.

Simpson says she has never wanted to be a performer and doesn’t feel she could do justice to her own costumes. But for her, fashioning outfits that help others shine onstage is an ideal means of self-expression.

“It’s a great creative outlet for me. I’ve always been a behind-the-scenes kind of person.”