Squash or be squashed 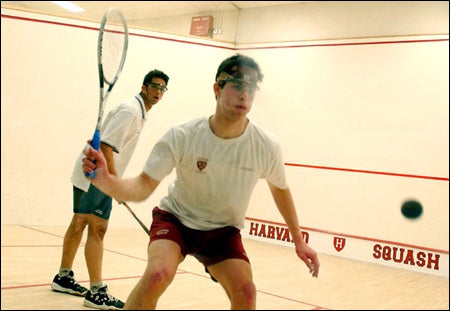 Sophomore Asher Hochberg (right) squares off against Yale’s Aftab Mathur in the Crimson’s final dual match of the season on Feb. 19 at the Murr Center Courts. Harvard fell, 5-4, but returned the favor at the College Squash Association Team Championships this past weekend at Princeton, topping the Bulldogs, 5-4, in the consolation round of the national tournament. The Crimson took third place to end its season with a 6-3 overall mark (4-2 Ivy). Meanwhile, the women’s team captured the Ivy title for the third straight year with a 5-4 victory over Yale on Feb. 19. The Crimson, who will compete in the WISRA Individual Championships this weekend at Trinity, finished the regular season perfect in the Ivies at 6-0 (8-1 overall).