A largely unheralded meeting is under way in Europe that some say is akin to a constitutional convention for a slowly emerging supernation but that experts at a Harvard conference Friday (Jan. 31) said is unlikely to produce startling changes in the European Union. 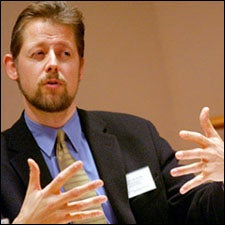 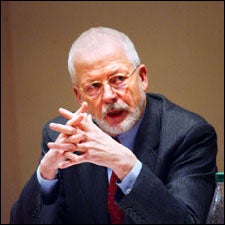 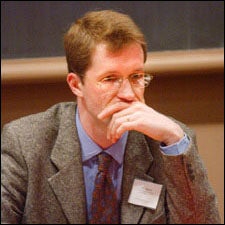 Their mandate is to craft new structures and functions of the European Union that will better meet the demands of today’s world. The convention could propose sweeping changes that would transfer regional security, taxation, and welfare powers to the EU, effectively transforming it into a kind of superstate, with the power to tax and redistribute wealth among EU countries as well as with the power to raise a European army.

But experts who spoke Friday at the Minda de Gunzburg Center for European Studies agreed that such a radical step is unlikely and would be resoundingly defeated anyway by national electorates that must ratify the document.

Instead, they said, the convention will likely streamline current procedures and policy-making processes and, perhaps more importantly, lend a new level of democratic legitimacy to the EU in the eyes of European citizens.

George Ross, of Boston University, called the convention “a new animal in the European political zoo” and said the convention is different from previous treaty-making meetings that created the EU. Those meetings were essentially agreements made between different national governments. The convention, Ross said, is an effort to draw input from a much broader spectrum of society in a more open process that will, one hopes, result in an agreement more reflective of the thinking of European society.

Much of what comes out of the 10-month convention is likely still to be seen. The convention is at its halfway point, which made the timing good for Friday’s conference, according to Center for European Studies Executive Director Patricia Craig.

Craig said questions of overall governance, elections, and how democratic an institution the EU should be are all being addressed at the Convention. Further, she said, those questions echo internationally, with the increasing prominence of international organizations like the EU, the World Trade Organization, and the North American Free Trade Agreement.

“These are institutions that are increasingly important. The question is how we get democratic representation in them,” Craig said.

Indeed, the EU’s supposed “democratic deficit” was the subject of an afternoon panel discussion that featured experts from Harvard, the University of Wisconsin, the Université Libre de Bruxelles, and the Max-Planck Institut.

Panelists agreed that the EU as currently composed is a fairly democratic institution that has a high degree of legitimacy resulting from the required consensus of member nations for its major policies.

That consensus, however, often creates policies that nobody is happy with and nobody wants to defend. That may be one reason that the European public broadly views the EU as a nondemocratic institution in which they have little say. Bridging the apparent gap between the reality of the EU’s democratic decision-making processes and the view of the person on the streets of Europe may be one result of the European Convention that could have lasting benefit.

Though expectations of the convention’s outcome were fairly low among panelists – the achievement of “a streamlined status quo” – the fact that the organization has gone to great lengths to reach that streamlining, in what most agree is a very open fashion, may be one of the most important things to emerge.

“Most people think the EU is not democratic, so this is a very powerful public belief,” said Paul Magnette, of the Université Libre de Bruxelles. “We could argue that the process matters. It might contribute to improved democratic legitimacy.”

Whatever comes out of the convention should begin emerging this spring. Peter Norman, a reporter for the Financial Times who is researching a book on the convention, said it is reaching the phase when decisions on how power is shared and applied are being negotiated.

“By my analysis, the Convention is going into its most critical phase,” Norman said.