Deconstructing dimensions to understand the universe:

Arkani-Hamed looks to extra dimensions for explanations of nature

Nima Arkani-Hamed is searching exotic places for clues to questions about our universe’s construction and the gravitational glue that holds it together.

Arkani-Hamed, a theoretical physicist who was appointed professor of physics last July, is looking at places so exotic they stretch beyond the dimensions we live in every day and may exist only in theories.

Physicists describe our everyday world as having four dimensions. The first three are the familiar width, length, and height. The fourth dimension is time, because something has to have a life span – just as it needs the three dimensions that give it shape – in order to exist.

Arkani-Hamed is investigating fifth, sixth, and higher dimensions to see what they’ll tell him about the universe. He’s looking for clues to the mysteries of why gravity is so weak compared with other basic forces in the universe. He’s also searching for missing pieces in our understanding of the physical laws of nature.

Current theories are too neat, he said, to fit our messy world and, though they explain what has been observed so far quite well, they also require everything to be finely adjusted just right in order to work. In a 2000 article in Scientific American, he used the analogy of a pencil balancing on a tabletop on its sharpened tip – possible if all the forces on it balance out just right – but not highly likely.

Arkani-Hamed isn’t just looking at extra dimensions, he’s taking them apart. His current work, some of which he has conducted with Mallinckrodt Professor of Physics Howard Georgi, involves “deconstructing dimensions” to see what their pieces tell him.

He has theorized that space is not a basic property of these extra dimensions. Space is instead a secondary property created by other more fundamental forces. By constructing theories that remove space from the extra dimensions, he can better study those dimensions’ fundamental forces. Without space, those forces can be collapsed theoretically into our own four-dimensional space, making them easier to analyze and understand. 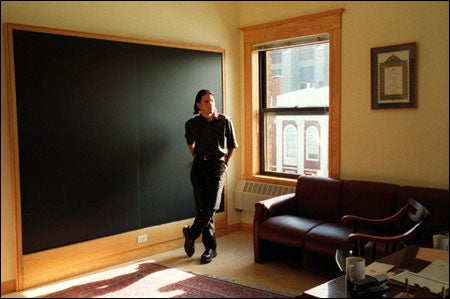 Bending the mind around five dimensions

Such dimension-jumping forces aren’t known for sure, but Arkani-Hamed thinks one of them may be one of the most familiar in the universe: gravity.

Unlike the other basic forces of nature – the strong and weak forces that operate at the atomic level, and electromagnetism that keeps our electronic society humming – gravity is familiar to virtually everyone who has ever seen a leaf fall or dropped their keys.

Familiar though it is, gravity is something of a puzzle to physicists. One problem is that, compared with the other forces, gravity is extremely weak. It takes the gravity exerted by a huge body like the Earth to keep small creatures like us from floating off into space. Meanwhile, a common magnet smaller than your fist has no trouble overcoming gravity and picking up a paperclip.

Arkani-Hamed believes that extra dimensions may hold the answer to gravity’s weakness. If gravity is able to act in fifth, sixth, and higher dimensions, that could effectively dilute the force of gravity in our four dimensions and explain its apparent weakness.

Arkani-Hamed’s journey to Harvard began as a high school kid in Toronto, where he first became interested in theoretical physics. Physics excited him, he said, by explaining nature’s basic forces in ways he could not only understand, but also use to predict what will happen in specific cases.

“He’s particularly known for work he did that pointed out the world may have more dimensions than we’re used to,” Gabrielse said. “He’s responsible for stimulating a lot of activity in the experimental community to confirm his theories.”

Perhaps then it’s not surprising that Arkani-Hamed says one of the most exciting things about theoretical physics today is experimental physics.

For the first time, he said, technology has become sophisticated enough that the immense forces needed to test some of these exotic theories about the universe’s structure can be harnessed.

The Large Hadron Collider (LHC), under construction west of Geneva, Switzerland, may be able to provide evidence of two or more extra dimensions sometime in the next five years.

“In five years, we’re going to start knowing the answer to these questions experimentally,” Arkani-Hamed said. “We’re lucky to actually live in an era when we’re going to get these answers.”

Though he is expecting some kind of evidence to emerge at the collider, Arkani-Hamed said it won’t be time for physicists to say “Okay we understand it all now” and go home. Rather, he said, the evidence will provide further clues, and provide a foundation to a whole new set of theories.

“It’s likely to be a borderline situation where the LHC will tell us that something is going on,” Arkani-Hamed said. “I don’t think we’ll have the first round of data and everyone will say ‘This is it.'”

Stimulating environments around a blackboard

In the meantime, Arkani-Hamed said, theoretical physicists like himself will continue to gather, challenge each other’s thoughts, and collaborate on new ideas. Such interplay is critical to development of new theories, he said, because, unlike experimental physics and other sciences that rely on high-technology equipment or complex computer models, most of his work is still done with a pen and paper, or on a blackboard with a group of colleagues.

“We use good old-fashioned brain power,” Arkani-Hamed said. “A lot of the best ideas in physics are really simple. They’re hard to come up with but they’re simple.”

That kind of thinking thrives on free interplay between physicists and Arkani-Hamed praised the design of the Physics Department’s Jefferson offices, laid out around an open central area with several groups of discussion areas near large blackboards.

“You focus on some big questions and go at them. You think about possible approaches and toss around ideas with the graduate students and postdocs,” Arkani-Hamed said. “That’s sort of why we don’t lock ourselves away and grind away at calculations. There’s very little history of that ever working out.”