Poison at the end of the rainbow:

In a shantytown in Ecuador, mercury poisoning plagues children of miners

It sounds like an “Alice in Wonderland” tale. Children intoxicated by mercury shake and grab themselves like Mad Hatters in a mountain settlement known as the place that no one can find.

But, sadly, it’s a true story. Mercury vapors from gold mining are causing brain damage in the children of Nambija, an Indian word that means “the place that no one can find.” It’s a shantytown in southern Ecuador that represents a piece of a large and growing health problem.

“What’s happening in Nambija is a local example of what’s happening to children of gold miners in indigenous communities all over the Andean and Amazon regions of South America,” says S. Allen Counter, an associate professor of neurology at the Harvard Medical School. A humanitarian and an explorer as well as a doctor, Counter describes the problem in the January issue of the Journal of Occupational and Environmental Medicine. “We have laboratory evidence of what mercury poisoning does to gold miners,” he says, “but this is the first time we have been able to show from tests in the field what is happening to their children and wives.”

The evidence he and his colleagues have found in the blood and brains of children in Ecuador also bears on growing concerns in the United States. Some hospitals and doctors’ offices are replacing blood pressure gauges that contain mercury, and at least one state, Connecticut, is phasing in a ban on mercury thermometers.

Counter is also concerned about other uses of mercury in the United States and Africa. Some immigrants to the United States from Caribbean countries, such as Haiti, scatter mercury powder around their homes as part of religious rituals. Unusually high levels of mercury in the urine of people living around Lake Victoria in East Africa have been traced to skin lighteners that contain the element. A small group of doctors in the United States worries that mercury, used as a preservative in children’s vaccines, may underlie the alarming increase in cases of autism in this country. Gold poaching

In Nambija, and many other gold camps, men break up gold-containing rock with dynamite, then carry the fragments in sacks to processing areas. On the way, they surreptitiously drop off some of the ore for their wives to pick up. The women mix the ore with quicksilver, or liquid mercury. Gold flecks combine with the mercury and the amalgam can be easily separated from worthless soil and rock.

It’s a common sight to see Indian women, with children on their backs, or together in a small hut, heating the silver-colored, gold-flecked amalgam balls in metal pots. The heat vaporizes the mercury, leaving a pot of pure gold worth about $100 to impoverished families. The process also leaves mercury vapors that are inhaled by the children.

Some of the women are aware enough about the danger to cover their mouths with shirts or cloths, but that’s ineffective. It doesn’t stop poisonous vapors from passing into the lungs and from there into blood vessels. This blood carries mercury to the brain, and can affect the brains of fetuses in the womb.

After overcoming the reluctance of children to get stuck by needles, Counter’s group took samples of their blood. When these samples where analyzed in a U.S. laboratory, it was found that the Andean children had extravagantly high levels of mercury.

In this country, 0.3 micrograms of mercury per liter of blood is average for the general population, 10 micrograms is the level at which dental technicians, dentists, and others who handle mercury (for tooth fillings) begin to worry. Indian children in Nambija reach 26, 59, even 89 micrograms. Some of their mercury intoxication may also come from eating fish from local rivers contaminated by mercury spills from the mines.

Anomalies appear in the way information is processed by the brains of these children. Nerve signals generated by outside sounds and sights move more slowly than normal and sometimes disappear completely. Outward physical signs include involuntary shaking, grabbing their heads and upper bodies, and hyperactivity. Counter compares their activities to those of the Mad Hatter in “Alice in Wonderland,” a character based on hat makers in England who used mercury to give their products shape.

Counter is the Indiana Jones of neurology. He has studied acupuncture in China, deafness in the Inuits of the Arctic, and poisoning among Indians in Ecuador who use lead from old batteries to glaze roof tiles. Crossing swift rivers and hiking uphill to Nambija, 6,000 feet into the mountains, is routine for him. Gold bandits, armed soldiers, 12-year-old boys with automatic rifles, and dynamite explosions in mining caves do not deter him, nor does the stance of mining companies toward his “interfering” in their business. In addition to everything else he does, Counter directs the Harvard Foundation for Intercultural Studies, an institution dedicated to fostering greater understanding and interaction between different cultures and races. So he is used to people telling him to mind his own business.

At first, the women of Nambija denied that they were poaching and cooking gold ore. It is, after all, illegal. But the practice is too widespread to hide. With the help of Fernando Ortega, from the Universidad de San Francisco de Quito in Ecuador, Counter explained how mercury was poisoning them. He distributed medicine, nutritional supplements, and respirator masks to the women and children, purchased with funds he raised from Harvard alumni and other contributors. He has informed the government of Ecuador about the situation, and insists that the gold can be separated from soil and rock particles without mercury.

Counter intends to bring some of the most severely affected victims to Children’s Hospital in Boston. Michael Shannon, a Harvard Medical School pediatrician, and Leo Buchanan of Harvard University Health Services have volunteered to treat the children as they have those in Ecuador. Since the Sept. 11, 2001, terrorist attacks, however, visas for foreigners have been much harder to obtain.

In addition to helping such children, Counter thinks the United States should take a closer look at the use of mercury in religious rituals. In some inner-city enclaves, people who have come here from various Caribbean nations burn mercury powders that create vapors similar to those that come from burning amalgam in Nambija. Counter would like to see an education program for these people like the one he created for the gold mining families. 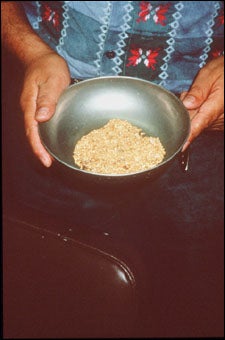 He also brings experts together to discuss other possible sources of mercury poisoning. In one such meeting they talked about the fact that many vaccines used to immunize children against diseases like whooping cough contain a mercury-based preservative. Most vaccine makers no longer use the preservative, and there is no proof that it is tied to recently documented increases in autism. Nevertheless, lawsuits have been filed against drug companies by the parents of autistic children.

“We should do further research to determine if a connection does exist,” Counter comments.

The principal of the school in Nambija was so pleased with Counter’s efforts that he offered him a piece of rock laced with gold. Counter looked up at the excavations that have gouged and despoiled the mountain from which the gold came, and thought of a woman whose five children have been poisoned by mercury – children like his own two young daughters. “No thank you,” he said politely.