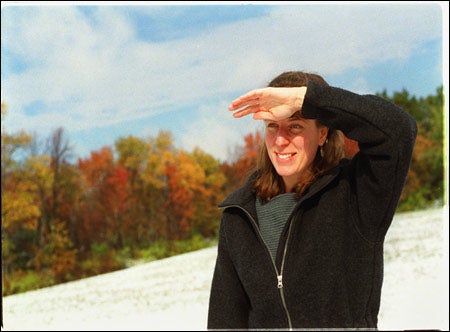 I picture Siberia, three weeks away:
deep snowy trees sleep along the horizon.
Another heave, I slide into a blue

hallucination … a swirling alphabet of snow …
Cossacks shouting, whipping the hull
to outrace a squall … I lurch locked inside
a giant trunk marked Roxanna Lord

– from “Passage to Vladivostok, 1894,” by Sophie Wadsworth

When Roxanna Lord Pray – Roxy to all who knew her – left Maine as a newlywed to join her husband’s family in Siberia in 1894, she sent home letters. Thousands of letters, written throughout her 36 years in Vladivostok, rich with details of her life, images of East Siberia, and the mood of the time in which she lived.

To her great-granddaughter, Sophie Wadsworth, the letters were a blessing and a responsibility. “I’ve met that blessing through poetry,” says Wadsworth, a staff assistant in the History of Science Department.

Wadsworth has written a narrative collection of poems called “Letters from Siberia: Roxanna Lord Pray,” weaving her great-grandmother’s letters with family stories for a first-person account that, Wadsworth says, transcends strict historical accuracy to “tell the truth truer than the truth.”

December: I wake to snow.
Flakes big as Quaker bonnets
fill the graves dug in fall
ready for the winter dead.
Charlie’s body lies locked in
while winter cinches its leaden skirts
around the house, inches up the windows.

Don’t let me die in winter, in Siberia.
I want my last breath to come
when the orchard in Berwick
is white with blossoms.

While prose or history might more precisely serve the facts of Roxy’s life in Vladivostok, poetry, with its distillation of images and sharp focus on details, tells a story that’s simultaneously tighter and more expansive. “By going deep into the particular, you can touch on the universal,” says Wadsworth.

Last night I dreamt of pot roast and pastries,
My love at dusk coming through the door,
Two ducks in hand.
No one knows why I stay,
Sometimes not even me.
I run my tongue over my teeth.

Working part time at Harvard, Wadsworth is serious about her poetry, writing six mornings a week and teaching poetry to adults. Several poems from “Letters from Siberia” have been published in literary magazines, and she is sending out the 35-40 page collection as a chapbook, a small book of poems.

Yet unlike her day job, where she assists a professor in research, editing, and administrative work, poetry demands something far more elusive than dedication and tenacity.

“So much of poetry is unknowing,” she says. “The image I have is that I sit down on the floor with the unknown and we string together the words like beads, like we’re two kindergartners. At my best, that’s what it’s like.”

On the floor, bits of snow melt:
a dozen beaded eyes
hold me upside down,
then vanish into the boards.