By Liza Weisstuch Special to the Gazette

According to legend, spirits of the dead are drawn to the smell of marigolds. Since ancient times, the flowers have been scattered in villages throughout Mesoamerica on “Dia de los Muertos,” Day of the Dead, to lure the souls of departed family members and friends. 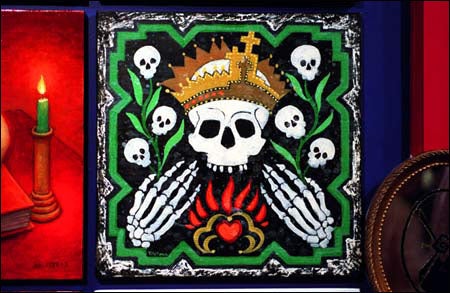 The central attraction was the altar stationed amid the Peabody’s permanent exhibit of Mayan and Aztec culture. A principal element of traditional festivities includes setting up elaborate altars embellished with food, personal memorabilia, and religious artifacts to welcome deceased loved ones back for the day. The piece above was made by Jenny Quinonez of Brookline High School.

Marigold blossoms were prominently displayed on Saturday (Nov. 2) at the Peabody Museum of Archaeology and Ethnology. On the date the holiday is celebrated throughout Mexico and Latin America, local families flocked to the museum for a day of activities and performances amid an exhibit curated by Davíd Carrasco, the Neil L. Rudenstine Professor of Latin American Studies.

The origins of Day of the Dead lie in the rituals of the ancient Aztecs, but since the Europeans conquered the indigenous people, the occasion has become a blend of ancient Mesoamerican traditions and the Catholic All Saints and All Souls days.

Last weekend’s activities were presented as a collaboration between the Peabody Museum and the Harvard Museum of Natural History. With parents bringing up the rear, children scuttled back and forth between the two adjoining museums, stopping at tables to add Crayola color to ancient glyphs (the symbols the ancients used as script), write and post notes to their own dearly departed, and gawk at the “Skullduggery” display, a table lined with skulls of various mammals.

But the central attraction was the altar stationed amid the Peabody’s permanent exhibit of Mayan and Aztec culture. A principal element of traditional festivities includes setting up elaborate altars embellished with food, personal memorabilia, and religious artifacts to welcome deceased loved ones back for the day.

Sam Tager, the Peabody’s exhibit manager and designer, described a dilemma that emerged while developing the museum’s piece. Planners wanted to display valuable items from the museum’s Alice Melvin Mexican Folk Art holdings, such as richly colored candelabras, but were aiming simultaneously to create a sense of authenticity and immediacy.

“An altar is a living thing, it shouldn’t be behind glass. We didn’t want to put out museum objects and put glass up between them and the rest of the altar material. We could make the inside interesting, but the question was how to justify the outside,” said Tager.

Designed by Monica Martinez, a Massachusetts College of Art student and Mizael Sanchez, both from Mexico, the altar houses a color-intensive array of objects representing both the ancient aspect of the holiday and the Catholic symbols that have become incorporated into the tradition. From skeleton statues to plush Jesus dolls, a celebratory air befitting the spirit of the holiday exudes from the 8-foot-tall structure.

But the big box in the middle of the gallery, which will be intact for a year, is closed at times. In fact, regular open presentations are only held through November. So to resolve that initial challenge of “justifying” the outside, blank wooden panels were sent to area artists and schools to be decorated. The local community came through brilliantly. The 35 panels adorning the exterior walls feature artists’ and children’s vivid representations of the tradition.

“Day of the Dead is perfect for artist contributions because there’s so much imagery associated with it,” said Tager.