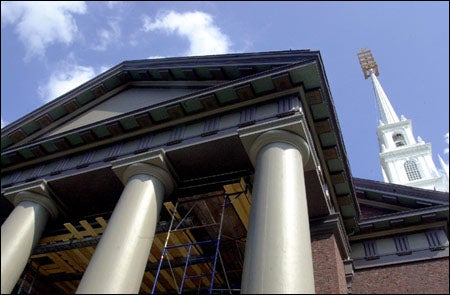 The Rev. Peter J. Gomes, the Plummer Professor of Christian Morals and the Pusey Minister in the Memorial Church, said, ‘We’ve gone from being a memorial and a preaching station to a diverse and vibrant center for spiritual life in the University.’
The Memorial Church is set to mark its 70th anniversary Sunday (Nov. 10) during its annual Commemoration of Benefactors and of the War Dead.

The church is planning a celebration to mark both occasions, with a special note of thanks for the successful conclusion of the recent Campaign for The Memorial Church. The sermon that morning will be preached by Eric Anderson, provost of Eton College, England. The commemoration of the War Dead will occur during the service, including the laying of a wreath in the Memorial Room by Harvard and Massachusetts Institute of Technology members of ROTC.

After the service, the Rev. Peter J. Gomes, the Plummer Professor of Christian Morals and the Pusey Minister in the Memorial Church, will host a lunch featuring Harvard President Lawrence H. Summers, former Faculty of Arts and Sciences Dean Jeremy Knowles, and Lord St. John of Fawsley, former master of Emmanuel College, Cambridge, the alma mater of John Harvard.

Gomes said that over its 70 years, the church has grown to hold a much more central role in campus spiritual life than it had at its inception.

“There’s been no radical changes but an evolution,” Gomes said. “We’ve gone from being a memorial and a preaching station to a diverse and vibrant center for spiritual life in the University.”

Lord St. John of Fawsley was the keynote speaker during the campaign’s kickoff, and so is an appropriate speaker for a celebration of the campaign’s conclusion, according to the Memorial Church’s Director of Administration and Development Daniel Sanks.

The luncheon will occur under a large tent outside the Yard in front of the Science Center after a procession from the church featuring bagpipers, vergers, clergy, choir, and the congregation.

The Memorial Church was dedicated on Armistice Day, Nov. 11, 1932, as a memorial to the Harvard war dead from World War I. Additional memorials have since been added to honor those who died in wars following WWI.

As part of its annual recognition of benefactors, the church will celebrate the successful conclusion of the Campaign for The Memorial Church. The campaign concluded Dec. 31, 2001, raising $8 million for the church, but officials wanted to wait until the historic anniversary to celebrate the campaign’s closing, Sanks said.

Gomes said the campaign’s dollars will help provide endowments for people and programs, rather than securing bricks and mortar, providing security for those positions and programs for the first time.

“It’s the life within the building that’s being sustained by this,” he said.