Library users will enter through the Massachusetts Ave. entrance

Widener Library’s cascade of granite steps, its tall oak doors guarded by Corinthian columns, and the classical serenity of its marble lobby will be off-limits for the next six months as phase two of the building’s renovation project gets under way. The grandeur of the building’s facade and entranceway will not change, however. It will merely emerge cleaner, spiffier, and ready to face the 21st century.

In the meantime, Widener users will enter through the Massachusetts Avenue entrance where color-coded footprints will guide them to various locations. In spite of these detours, Widener’s collection of 3 million-plus volumes will continue to be accessible to users, and nearly all the library’s facilities and services will function normally.

If the success of phase one is any indication, phase two should proceed with comparable smoothness and efficiency.

“It’s been absolutely wonderful,” said Lynda Leahy, associate librarian of Harvard College for research and instruction. “I still can’t believe that we’ve moved 3 million books – twice! The contractors, the staff, the users – everyone’s been extremely flexible and understanding, and it’s exciting to see all the new improvements.” 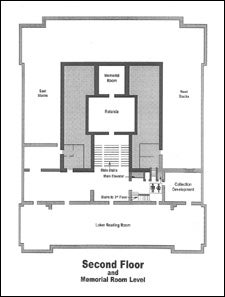 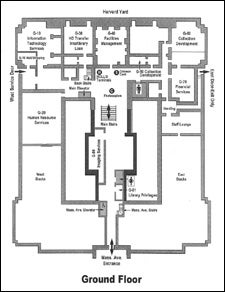 The five-year renovation of Widener is a massive construction project that began in June 1999 with the Widener Stacks Renovation (WSR), undertaken to ensure the long-term preservation and security of the library’s collections. The project concluded in August, leaving the stacks with upgraded heating, ventilation, air conditioning, lighting, humidity control, electrical, fire suppression, and security systems.

Although some improvements are scarcely detectable, Widener users are sure to have noticed many of these changes. In place of the ancient light switches that had to be flicked on and off when entering and leaving a section of shelves, all stacks are now equipped with motion-triggered lights that go on automatically.

Computer monitors have been placed throughout the stacks so users can consult HOLLIS without having to change location. The metal shelves have been painted; the slow, claustrophobia-inducing stack elevators have given way to large modern elevators located in the building’s core; the marble floors have been cleaned and given a coat of nonslip polish; and sleek new study carrels with data jacks and locked compartments have replaced the battered old relics used and abused by generations of students.

Perhaps the most striking change from the point of view of researchers is the way the books have been reorganized for greater convenience. Previously, similar materials were often placed in completely different locations because of the two classification systems employed in the library – Old Widener and Library of Congress.

One of the major goals during the renovation has been to bring together the two systems, so materials on the same subject are adjacent to one another. At the beginning of the project there was only 15 percent adjacency. This has now been upgraded to 98 percent.

“The renovation is dedicated to restoring Widener, not to changing it,” said Leahy. “We want to keep that sense of Widener as a wonderful work of art, but at the same time put some of the spaces together in a more logical way. The main goal is to provide the best service we can.”