The world is their classroom

Eva Laier ’04 studied the roars of monkeys in Uganda’s rainforest. Peter Hopkins ’04 chatted up Serena Williams at Wimbledon. In Costa Rica, Jesse Rokicki ’03 went for a week without a shower.

And Harvard is a much better place for it.

Laier, Hopkins, and Rokicki are among the 25 Weissman International Interns who spent the past summer living, working, and learning – in often unexpected ways – around the globe. They shared their stories with benefactors Paul (’52) and Harriet Weissman at a lunch Monday (Oct. 28) at the Faculty Club.

Harvard President Lawrence H. Summers and Dean of the Faculty of Arts and Sciences William Kirby were also on hand to discuss how the Weissman Internship could be a foundation upon which the College could further globalize its experience for undergraduates.

Calling study abroad “a critical priority for us in the years ahead,” Summers said, “My hope would be that there will come a time when … it would be very surprising if you graduated from Harvard not having had some kind of international experience.”

“[The Weissmans’] vision has set a precedent for the type of changes we still need to make,” said Kirby.

Uniquely student-directed, Weissman International Internships require students to research and secure their own internship opportunities and submit budget proposals that include their travel and housing expenses.

And, perhaps most importantly the interns must return to Harvard.

Open only to sophomores and juniors by explicit design, the program seeks to promote internationalism at Harvard by ensuring that students return from their internships and bring their experiences to their classes, extracurricular activities, and houses.

“We wanted the students to be ambassadors for the program and for the international experience here at Harvard,” said Paul Weissman, who established the program with his wife in 1994. 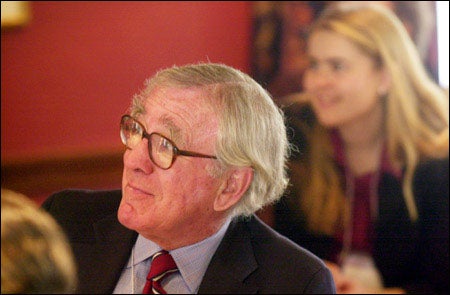 As each student gave a brief summary of his or her internship and stories of changed lives, changed concentrations, and changed worldviews emerged, it became clear that the Weissmans’ goal had been realized.

From Switzerland to New Zealand, students learned that even our friendliest allies do not see the world and its woes as we in the United States do.

Working as a research assistant at the Center for European Policy Studies in Belgium, Geoffrey Hamilton ’04 was stunned to learn that not all economics policy followed the principles he had studied in Ec10 at Harvard.

“I expected that the people I met at this policy think tank would all think the way I did. But there was an amazing diversity of opinion,” he said. “I’ve come back a changed person.”

“I didn’t expect to find such a gap in opinions on Afghanistan between Americans and Europeans,” she said. “Europeans have this sense of involvement that Americans have replaced with detachment.”

Peter Hopkins parlayed his experience writing for The Crimson into an internship with NBC News in London. He said he sought to understand how international news was gathered and conveyed to the United States.

One of his duties (which included the lighter chores of prepping Wimbledon winner Serena Williams and Tour de France champion Lance Armstrong for interviews) was watching unedited international news feeds to filter out what would be inappropriate for the evening news.

“I learned that we need to be rigorous scrutinizers of the information we receive,” he said. “Today, every morning, I now read 10 newspapers instead of two. No one source is getting it right all the time.”

Learning in the world’s classrooms

For some, the internships had an immediate impact on their academic lives.

Mawuena Agbonyitor ’04, a biological anthropology concentrator who is pre-med, cloned the RNA of respiratory synctial virus in a biology laboratory outside of Paris.

“That in itself is really cool to tell my friends,” she admitted.

But beyond bragging rights, working in a genetics lab filled a gap in her learning.

“Since genetics is the new wave of science, I thought it was important to get this experience,” she said.

Students working in foreign languages encountered an additional layer of challenges and opportunities as they took their classroom language into the workplace.

Working on rural health and women’s issues with the Costa Rican Humanitarian Foundation, Jesse Rokicki described speaking Spanish “24/7” – along with going a week without a shower – as a challenge she was pleased to learn she could rise to.

Tom Clarke ’04, who joined the editorial staff of French newsweekly Valeurs Actuelles, was succinct in citing his academic transformation during his internship.

“This spring I took Professor [Judith] Frommer’s business French course and read an article about the car company Renault,” he said. “This summer, I wrote my own article about Renault.”

Naresh Ramarajan ’04 went to Senegal a biochemistry concentrator but returned with an academic focus on Near Eastern languages and civilizations. His internship – working with a Senegalese doctor to assess the health care of elders in remote sites – fostered his interest in Arabic and Islam.

Growing up in Madras, India (as well as the United States), Ramarajan witnessed the intense polarization between Hindus and Muslims. While he said he had great apprehension about immersing himself, a Hindu, in an all-Muslim community, the experience was valuable.

“It was the first time that I was able to decide for myself about Islam and Islamic culture,” he said. As he learned Arabic and studied the Qu’ran, he found the Senegalese Muslims he worked with open to discussing their beliefs and his.

“They were very eager to exchange ideas,” he said.

One by one, as the interns shared their stories and their gratitude to the Weissmans, they bore out the vision that the Weissmans had – and that Summers and Kirby embraced: By going abroad, they can enrich the experience at Harvard.

And, of course, the interns all left something – good work or a new perspective on Americans – behind at their internship sites.

Deema Arafah ’03 left a legacy of soccer balls at the Palestinian refugee camps in Jordan, where she worked with children. She bought 20 soccer balls with money she saved by arranging to stay with a family there.

Before giving the balls to the refugee children, she penned a note on each one: “Thank you to the Weissman family.”