Students' research focused on the Gacaca system of community-based courts

The Rwandan genocide memorial was a tiny one-room church, pervaded still by a penetrating stench. On a table in the church was a pile of human skulls and femurs, a startling reminder of the people who sought shelter there in 1994 when the killers came calling.

“It just struck me that in this one church 5,000 people died, innocent people, and the world didn’t blink an eye,” said Harvard junior Leila Chirayath.

The students’ efforts – undertaken largely independently – focused on the newly created Gacaca system of community-based courts. The Gacaca courts are considered essential because they both involve the broader community in finding justice and they relieve the regular court system of the burden of handling the thousands who have been accused of genocide-related murder, assault, robbery, rape, and property destruction.

The students, who came together through an informal network of those interested in African development, put the trip together under the guidance of Robert Bates, Eaton Professor of the Science of Government, and with the assistance of Jens Meierhenrich, lecturer in the Departments of Government and Social Studies, who accompanied the students to Rwanda.

Though several of the students said they met others in the group during Bates’ fall 2001 class on African development, Bates said he became aware of their project only during the course of the class, after the plans were being formed.

Once he knew of their plans, Bates encouraged the students and helped guide their efforts. His role, he said, was to help form their project into a serious research effort, and to make sure they knew about the difficulties they could run into in Rwanda.

“I made sure they knew what they were getting into, that they got all the bad news ahead of time,” Bates said. “The other thing [I did] was to make it serious, make it a research project and not just an alternative to spending a summer at the beach – and these kids were serious, so that was not a problem.”

Meierhenrich said his goal was to guide the students and to help get them excited about working in Africa, on which there is a shortage of scholars, he said.

“The students have come a long way. They started from scratch with little or no exposure to serious research and ended up with a good understanding of what it takes to make sense of an unfamiliar culture,” Meierhenrich said. “If you want to understand Africa, it is critical to get dust on your boots. I think the students have come to appreciate this during the trip. And, if we are lucky, they will spread the word.” 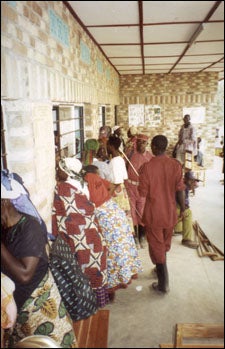 The group came together through a series of informal connections. Not all of the students involved were in Bates’ class. One, Catherine Honeyman, worked last year for Women Waging Peace when a group of Rwandan women visited campus. Several students’ homes are in Africa, and two, Andrew Iliff and Alfa Tiruneh, were co-presidents of the Harvard African Students’ Association. Also involved were Shakirah Hudani and Justina Hierta.

Together they planned the six-week trip, making their contacts, getting visas, and plotting their research strategy. Along the way, they had to convince skeptical friends, classmates, and relatives that the trip was not only worthwhile, but also safe.

“There were definitely doubts about safety,” Honeyman said. “People were saying, ‘Are you crazy, you can’t go there.'”

Honeyman, who is from Madison, Wis., said her parents were probably among the most concerned. But they were ultimately persuaded by the importance of the mission, she said, and her constant updating them on planning and safety arrangements.

Hampering the planning was the difficulty in obtaining accurate and up-to-date information, the students said. Even as they flew to Rwanda in mid-June, they thought their report would be about preparations for Gacaca. But while they were en route, they found out that the pilot phase of the justice system would begin during their stay, allowing them to observe the initial sessions.

They spent the first week or so in the Rwandan capital of Kigali. They broke into two groups and interviewed nongovernmental organizations and foreign government representatives based there. They also spent time searching for the latest documents on the structure of the Gacaca courts, as updated documents were difficult to find outside the country. Even when they did find the documents, they were often in the national language, Kinyarwanda, which none of them spoke. Finding English translations took several weeks.

“Even the most basic information on the structure of the courts isn’t available outside the country,” Iliff said.

When Gacaca opened on June 19, half of the group went to the first meeting in a Kigali suburb, riding with the Supreme Court justice who oversaw the session.

After that, the whole group went to Butare, where the national university is located and where they had made contacts in the law school. Several attended Gacaca meetings in communities near Butare, while others interviewed those being held for genocide-related crimes in area prisons.

Several then traveled back to Kigali, where they interviewed Rwandan government officials, including members of parliament, the minister of justice, and President Paul Kagame.

The report presents a mixture of practical suggestions – such as strategies for starting on time and erecting some kind of sun screen to make the proceedings more bearable for those in the audience, to more official recommendations on judicial preparation and salaries, and on the handling of crimes of retaliation.

All in all, the students said, though they found room for improvement in the Gacaca system, they were impressed with the commitment they found in Rwandans to both face up to the genocide and move on to the future.

“I was so impressed with the people we met. They have dedicated their lives to this,” Honeyman said. “They have their sights set on something and they’re moving forward.”