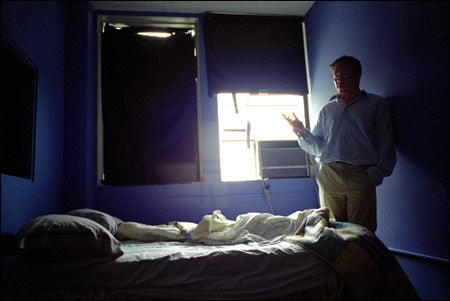 Practice makes perfect, but you can get perfect faster by sleeping on it.

That’s according to research led by Matthew Walker, an instructor in psychiatry at Harvard Medical School. He trained people to tap a complex series of keys on a computer keyboard as quickly as possible. After 12 minutes, they became relatively good at the task. Walker and his colleagues then re-tested the key-strokers 12 hours later after they did or did not sleep. Those trained in the morning and re-tested 12 hours later improved their performance by an unimpressive 2 percent. But those retested after a good night’s sleep averaged a significantly higher 20 percent improvement in finger speed without a loss of accuracy.

“Our research demonstrates that, after a certain time, further practice may not make someone perfect at a motor task,” Walker concludes. “However, a good night’s sleep after practice could be the key to perfection. It seems as though the brain continues to learn after practicing stops, and this learning only occurs during sleep.”

Another study, by Harvard psychology researcher Sara Mednick, backs up his conclusion. She and her colleagues trained volunteers to perform a difficult visual task, then tested the trainees after they had no sleep, a 30-minute “power” nap, or a one-hour snooze. The longer they slept, the better they performed.

Such findings “have important implications for learning real-life skills, including those involved with sports, playing a musical instrument, dancing, and even recovering motor functions after brain damage,” Walker believes. As an example, he cites the efforts of a pianist or gymnast working on a difficult passage or routine that they cannot master after hours of practice. Finally they give up in frustration. “If they set it aside, get a good night’s sleep, then return to the task, they are able to get through the routine more easily,” he says.

The reason is not fully known, but it probably has to do with a need to restore overused brain circuits and consolidate the learning experience. “Increased irritation, frustration, and decreased effectiveness after a prolonged effort may not reflect general mental fatigue, but rather the specific need of an overused local [brain] network to enjoy the restorative benefits of sleep,” Walker comments.

His research also shows the improved performance to be directly correlated with the amount of Stage 2 sleep a person gets. A nondreaming stage of slumber, it occurs mostly in the last few hours of a normal night’s sleep. “This is the part of a good night’s sleep people cut short by getting up early in the morning,” Walker explains. “You could say that modern life’s erosion of sleep time is seriously shortchanging your brain of valuable learning potential.”

This may help explain why infants sleep so much. “Their intensity of learning new skills and information,” Walker speculates, “may drive the brain’s hunger for large amounts of sleep.”