‘Faith and Doubt’ at Memorial Church: 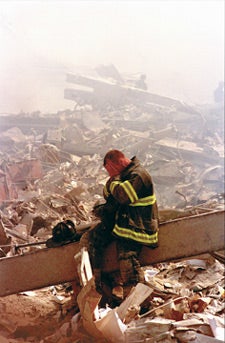 Emmy Award-winning filmmaker Helen Whitney will present portions of her PBS Frontline documentary “Faith and Doubt at Ground Zero,” at the Memorial Church on Oct. 23 at 7:30 p.m. The New York Times calls the film an “extraordinary work,” adding that it is an “elegantly made, unsentimental look at the widely varied ways in which the terror attacks affected religious beliefs, an important issue no other program has dealt with so thoroughly or thoughtfully.” Several individuals who appear in the film will join Whitney at the screening, including theology professor Monsignor Lorenzo Albacete of St. John’s Seminary, and attorney Terry McGovern, whose mother was killed in the World Trade Center.

“Much of ‘Faith and Doubt’ eloquently argues that deeper spiritual connections were forged through this crisis,” says TV Guide, and Newsday reports, “Victims, widows, bereaved parents, witnesses, priests, rabbis and Islamic scholars pour out their spiritual sorrows, fears and anger to producer Helen Whitney with raw sincerity.” The Wall Street Journal calls the film “harrowing and uplifting in equal measure.”

The event is free and open to the public, and free parking is available at the Broadway Garage on Felton Street. For more information, call the Memorial Church at (617) 495-5508.