By Photo by Justin Ide Text by Ken Gewertz 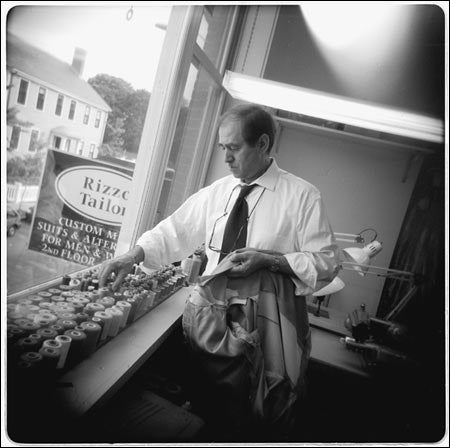 As a young boy in Calabria, Italy, Joe Calautti spent half his days in grammar school, the other half as an apprentice tailor, learning by watching the master tailors at their work.

Calautti still makes pants and jackets, sportcoats, suits, outerwear, but since 1964 he has been plying his trade at Rizzo Tailor in Harvard Square, a second-floor shop at the corner of Church and Brattle streets. He bought the business from his employer in 1973.

How many Harvard professors are walking around in custom-made Rizzo suits? Calautti isn’t sure, but there must be quite a few, and he remembers them all as good customers.

“They’re very nice people, very polite. They appreciate very much what we do. They never rush you. They know they get quality work, so they wait. We don’t just take the measurements and send them out to a factory. We do three fittings, just like the old days.”

Back in the ’60s, a lot of students came to Rizzo’s for custom garments. Some were regulars, people who dropped by just to chat or read the paper. One of them later endowed a fellowship in Rizzo’s name. But more recently there have been few students who can afford Calautti’s custom work. Mostly they come by just for alterations.

Calautti’s wife, Olga, helps him now. She went back to work after their two daughters were grown, and Joe taught her to do alterations. The two have known each other since they were kids in Calabria.

“We were childhood sweethearts,” Olga says. “He was 16 and I was 14. Later I came to America, and I promised that when I became a citizen I’d come back and marry him, and I did.”

Neither of them have any regrets.

“I’m very happy being in the United States,” Joe says. “I always liked the system, and I like the people.”

Olga interjects: “He always said to me, ‘I worked like a dog in Italy, and I didn’t have enough to buy a bicycle. In the United States I could accomplish what I wanted to do.'”