The greening of Harvard took another step forward this summer as, for the second year in a row, a group of environmentally minded interns took a hard look at Harvard’s buildings, vehicles, and equipment with an eye to make the campus more environment-friendly.

“The student internship program is an attempt to awaken a new vision for the University, a vision where technology and research become applied to organizations and [universities] become living laboratories for environmental sustainability,” said Harvard Green Campus Initiative director Leith Sharp.

The three-month internships are open to students at Harvard and other colleges. This year’s nine interns featured seven from Harvard, plus one from Stanford University and one from Schumacher College. Sharp said the internships were very competitive with roughly eight applicants for each spot. 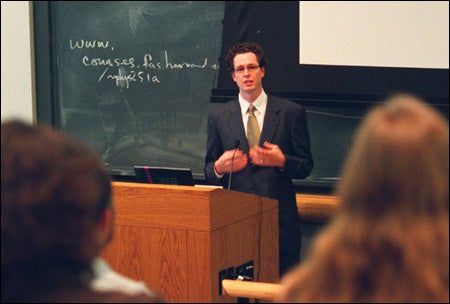 The interns presented the results of their work at three different sessions, the most recent Friday (Sept. 20) in Jefferson 250. As part of the goal to make the interns’ work more than an academic exercise, resulting projects are eligible for loans from the Green Campus Loan Fund. The fund, financed by the president and provost and coordinated by the Green Campus Initiative, is a $3 million to $5 million interest-free revolving loan fund targeted at projects with a five-year payback or less.

Margot Rabinowitz, a Harvard Business School student, did a feasibility study as to whether University Operations Services and the Harvard Green Campus Initiative could provide an energy efficiency service to the rest of the University community. The study initially focused on lighting, specifically the benefit of replacing 4-foot T12 fluorescent bulbs that use 45 watts of electricity with more efficient T8 bulbs that use just 26 watts.

Over the lifetime of the bulb, that means $22 in savings. Rabinowitz found there was strong interest across the campus for building audits. They conducted four trial building audits and found that in just one student dorm, replacing 250 T12 lamps with T8 lamps would save $12,678 over five years, and reduce the amount of carbon dioxide produced in energy generation by 7,271 pounds.

Rabinowitz’s lighting audit was so successful that she expanded the project, identifying other nonlighting energy-saving strategies they could include in future audits, such as heating and air conditioning systems, entire electrical systems, building envelopes, plumbing, and building automation.

Paul Rosenau, a student at Harvard Medical School and a master’s degree student at the University of Massachusetts at Lowell in pollution prevention, built on the work of two previous interns in environmental procurement.

After examining Harvard’s procurement practices, Rosenau said it became apparent that there is a need to approach environmental procurement with an integrated approach, one that considers health, market, and organizational priorities.

“The practice of environmental procurement can feel like you’re shopping in the dark,” Rosenau said.

Several interns said the internships were valuable personally. Rosenau said it was a great experience for him, as a medical student, to look at environmental problems from a material standpoint. Andrew Bengtson, a student at the Graduate School of Design who looked into energy-efficient buildings, said the internship was valuable for him and, hopefully, for the entire Harvard community.

“This internship has been an important learning experience and, as a member of the Harvard community, I had an obligation to raise a [conversation about whether] Harvard can have a more sustainable future,” Bengtson said.