May be the seed from our planet's formation 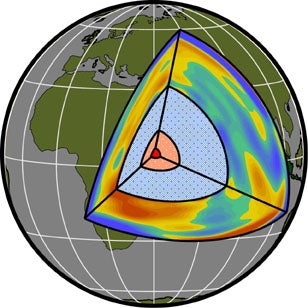 An odd, previously unknown sphere, some 360 miles in diameter, has been found at the bottom of the Earth. It was detected by a Harvard professor and a graduate student who patiently examined records of hundreds of thousands of earthquake waves that passed through the center of the planet in the past 30 years.

“It may be the oldest fossil left from the formation of Earth,” says Adam Dziewonski, Frank B. Baird Jr. Professor of Science. “Its origin remains unknown, but its presence could change our basic ideas about the origin and history of the planet.”

Earth’s center lies some 3,800 miles below our feet. Continents and oceans make up only a thin crust that extends about 20 miles down. Below them lies a huge, 1,800-mile-thick layer known as the mantle. Slowly moving currents of rock in the mantle cause continents to drift and the edges of the ocean floors to sink into huge trenches. The mantle encloses a core 2,100 miles in radius, blistering hot and made mostly of iron. The outer core is liquid, the inner core is solid.

That’s the way Earth has been depicted in textbooks for the past 66 years. But the work of Dziewonski and graduate student Miaki Ishii shows that this picture doesn’t get to the bottom of things. Engulfed in the inner core, like a pit in a peach, lies a 360-mile-wide inner inner core. This core within a core within a core makes up one ten-thousandth of the Earth’s volume.

The inner core itself wasn’t discovered until 1936. Thirty-five years went by before Dziewonski and geophysicist Freeman Gilbert proved that it was a solid enclosed in a liquid. (It doesn’t melt because of millions of pounds of pressure pressing down on each square inch of its surface.) Now, a careful study of how the speed of earthquake waves changes with the direction they take reveals that the innermost part of the inner core is obviously different from the rest of it.

Dziewonski and Ishii have published their results in the Oct. 1 issue of the Proceedings of the National Academy of Sciences.

The inner core, 1,440 miles in diameter and heated to a blistering 5,000 degrees, has puzzled earth scientists since it was discovered. In the early 1980s, researchers found earthquake waves traveling parallel to the axis of Earth’s rotation, roughly north-south, went through the inner core faster than did waves traveling along the equatorial plane, or east-west. The discrepancy went unexplained until 1986 when Harvard investigators, including Dziewonski, showed it was due to a phenomenon known as “anisotropy.”

Within mineral crystals that make up the core, molecules and atoms can be spaced differently when looked at in different directions. Earthquake waves travel faster through closely packed molecules and atoms than through those with more space between them. If packing is tighter in the north-south directions, earthquake waves will zip through the core faster than they would in the east-west direction.

Anisotropy explained much but not all of changes seen in the travel of earthquake waves. In trying to completely close the gap “things got a little wild,” Dziewonski recalls. Some people denied that anisotropy exists at all, others said that part of the inner core is isotropic and part is anisotropic, yet others  including Dziewonski for a while  believed that the inner core rotated at a different rate from the rest of Earth.

Because earthquake waves pass through the crust, mantle, and outer core on the way in to the center and on the way out, this introduces all kinds of complexities in trying to puzzle out their paths. “The inner core seemed to be the container for all the ignorance we had about the rest of the Earth,” Dziewonski comments.

To get the closet look yet into that container, Miaki Ishii and Dziewonski analyzed 30 years of data that covered several million records of the travels of earthquake waves. About 325,000 of them passed through the inner core. At first they saw no change: The inner core looked about the same from top to bottom. Then they took a sharper look at more than 3,000 waves that traveled closest to Earth’s center. They found an obvious change in anisotropy, or wave speed with direction, in an area 360 miles in diameter surrounding the very bottom of the world.

“It’s a very robust effect,” they insist. In the innermost inner core waves travel most slowly at a 45 degree angle to Earth’s axis, as opposed to an east-west direction in the rest of the inner core

How did it form?

Dziewonski speculates that this innermost iron ball may be a leftover from the original kernel out of which Earth separated into crust, mantle, and core some 4.6 billion years ago. Through subsequent years of meteoric bombardments and geological upheavals, including the ripping off of a big chunk to make the moon, the innermost core survived. If so, it is the oldest unaltered part of our planet.

However, other possibilities exist, albeit not as exciting. Most earth scientists believe the inner core is growing at the expense of the outer core. The solid iron sphere sits in the path of jets and currents roiling the outer core fluids like a big rock in a flowing stream. These patterns of flow might have been altered after the inner core reached a diameter of 360 miles. Afterwards, iron crystals deposited on the inner core surface in a different orientation, creating a different kind of anisotropy.

A third possibility is that at the higher pressure and temperature near the planet’s center, iron crystals pack differently. The change in packing pattern could alter the directions of fast and slow speeds traveled by earthquake waves.

Whatever the explanation, Dziewonski and Ishii expect a lot of heat from their colleagues. “The idea of a new region in Earth will generate quite a bit of controversy,” Dziewonski says. That’s probably a huge understatement.

Two of the leading scientific journals rejected the study’s conclusions before the Proceedings of the National Academy of Sciences decided to publish them. “A lot of people resist new ideas,” Dziewonski notes.

“Some scientists don’t believe our findings, although no one can point out a specific flaw in our data,” Ishii adds.

Ways exist to test Dziewonski and Ishii’s interpretation of what lies in Earth’s basement, but they are expensive and time consuming. Laboratory devices can subject small samples of rock rich in iron to pressures and temperatures approaching those at the center of Earth. Powerful beams of X-rays can map changes in crystal structure forced by such temperatures and pressures.

More definitive tests could be done with new arrays of seismometers, or earthquake-wave recorders. “Seismometer stations now in existence are unevenly distributed,” Dziewonski explains. “We don’t have the coverage needed to record deep waves passing through the innermost inner core.” To catch these waves Dziewonski wants to put temporary networks of recorders on the ocean bottom in the right places.

“For the first time in 66 years, we have good evidence for a new region inside Earth,” he states. “This tells us that, by gathering data of high quality, we can continue to make new discoveries about the planet on which we live. We cannot understand the evolution and dynamics of Earth without knowing its internal structure.”