Heavyweights battle over the Pledge of Allegiance

Town of Watertown and Harvard University announce agreementArsenal on the Charles

When the federal 9th Circuit Court of Appeals declared the phrase “under God” in the Pledge of Allegiance unconstitutional last June because it violated the separation of church and state, the ruling touched off angry protests across the nation, including a spontaneous pledge-in by members of Congress on the steps of the Capitol building.

Neither of the prominent law professors who debated the ruling last Thursday (Sept. 19) were observed to clap their hands to their hearts, but the confrontation did provoke some verbal fireworks. 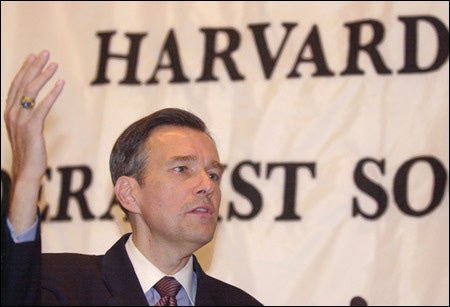 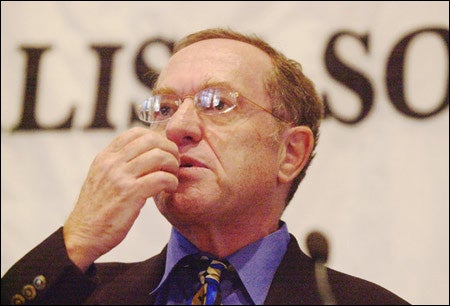 The debate, held under the auspices of the Harvard Law School Chapter of the Federalist Society for Law and Public Policy, pitted Alan Dershowitz, the Felix Frankfurter Professor of Law, against Dean Douglas Kmiec of Catholic University Law School on the question: “Does the Pledge of Allegiance, as it currently exists, violate the Constitutional separation between church and state?”

Kmiec led off the debate. Speaking before an audience that overflowed Langdell auditorium and spilled out into the hall, he pointed out that there is “a fundamental factual distinction between a pledge and a prayer.” A prayer is communication between an individual and God. A pledge is a promise of loyalty to a nation or other institution.

Unlike cases where there is an attempt to slip prayer into a school event like a football game, the 1954 addition of “under God” to the pledge was undertaken by Congress with full public knowledge. Moreover, the phrase is general enough that no one could reasonably feel excluded or hurt by it, Kmiec said.

Kmiec’s view was clearly different from that of Michael Newdow, the self-described atheist who brought suit against the Sacramento school system, charging that his daughter was injured by hearing other children affirm their belief in God. Nor was he in agreement with the court’s ruling, which said that having to say “under God” was no different from being made to say “under Jesus,” “under Vishnu,” or “under Zeus.”

Kmiec went on to affirm that the phrase “under God” is in keeping with the intentions of the Founding Fathers whose notion of natural law was based on the assumption of a Supreme Being.

“They anchored their thinking in the idea of a higher law in order to ensure that all power does not reside in the state,” he said.

By assuming the existence of this transcendent power, the Founding Fathers also secured the right of people to believe or not believe as they chose.

Dershowitz began his rebuttal in a conciliatory fashion, telling Kmiec that “I agree with much of what you said.” But he took exception to the idea that the pledge does not exclude or hurt anyone. He told a story of a young woman he knew who was ridiculed and stigmatized by her teacher when she refused, on grounds of conscience, to stand during the pledge.

“It worries me when we become like the Taliban,” Dershowitz said. “When we think we must be on the side of God. What about those of us who do not believe in a Supreme Being? Aren’t we good Americans? Can we accept a pledge that makes us accept a belief that not all of us subscribe to?”

In reply, Kmiec enlarged on the ideas he had presented in his first statement, adding that the language of the Declaration of Independence implies that man is made in the image of God and therefore possesses intelligence and free will. Belief in God and the concomitant belief in natural law are what led Thomas Jefferson to realize that slavery was wrong, even though the laws of his society told him differently, Kmiec said.

“However imperfect our understanding of God, the acknowledgement of a higher power is a constraint on government power. Without that concept, the state would be God.”

Dershowitz pounced on Kmiec’s use of the concept of natural law, pointing out that the U.S. Supreme Court at one time invoked natural law to assert that women were not qualified to be lawyers and that blacks were inferior to whites.

“What is ‘the crime against nature?'” Dershowitz asked, his voice rising. “Being gay! Natural law is not something we should be comfortable resting on. Natural law is dangerous! You invoke natural law when you want to get your way without having to argue about it. Jefferson believed in natural law, but Jefferson was wrong!”

Later, Dershowitz directly challenged Kmiec: “Would you accept the constitutionality of adding Jesus to the pledge?”

“I would not support such a change,” Kmiec said. “I don’t believe the two are equivalent. It would start us down the path to exclusion.”