Russell Mills, who was fired as publisher of the Ottawa Citizen following publication of a story critical of Prime Minister Jean Chrétien and an editorial calling for his resignation, has been awarded a Nieman Fellowship. 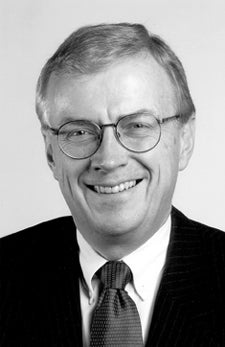 Mills plans to spend his fellowship year developing ideas for a university-based journalism institute in Canada. His studies at Harvard will focus on the changing nature of democratic systems of government and the role that the news media can play in creating the conditions for innovative public policy and healthy societies.

Mills, 57, worked for the Citizen for 31 years, the last 16 as publisher. He was fired on June 16, the day after receiving an honorary degree from Carleton University in Ottawa in recognition of his outstanding service to journalism.

His dismissal by the newspaper’s parent corporation, CanWest Global Communications Corp., set off a strong reaction in the Ottawa community and throughout Canada over concerns of press freedom and independence from corporate influence.

Reporters at the Citizen withheld their bylines from stories, Ottawa city council members denounced the firing, and some members of Parliament called for an investigation into the relationship between CanWest and Chrétien’s Liberal Party government.

Robert H. Giles, curator of the Nieman Foundation, said the opportunity to bring Mills to Harvard offered the University and the Nieman Program a rare chance to contribute to the development of a new journalism program that could have benefits on both sides of the border. Giles described Mills as “a journalist of uncommon experience and vision whose contributions to independent journalism in Canada and whose deep interest in international journalistic issues will add an important dimension to the Nieman class this year.”

Mills has just completed a term as chair of the Canadian Newspaper Publishers Association. He is a member of the executive board of the International Press Institute.

“I am extremely excited about the opportunity to spend a year at Harvard and draw upon its rich resources to develop a plan that will be of ongoing benefit to journalism and the functioning of government in Canada,” Mills said.

CanWest executives said Mills was fired for failing to seek corporate approval of the story reporting the prime minister had repeatedly lied to Parliament and the related editorial calling for him to resign.

CanWest is a diversified media company with print and broadcast outlets, including the National Post and 11 metropolitan daily newspapers in Canada. The company’s owners have been strong supporters of Chrétien and the Liberal Party.