‘Treasures from the Tombs’

China scholar next dean of FAS

According to the Bible (Genesis 11:31), the city of Ur was where Abraham lived before God sent him forth on his wanderings to find the land of Canaan.

Located near the confluence of the Tigris and Euphrates rivers, Ur was one of the principal cities of ancient Sumer, one of the world’s earliest urban cultures.

The era of the biblical patriarchs is believed to be about 2000 B.C., but Ur existed long before then. The items in the current Fogg Museum exhibition, “Treasures from the Royal Tombs of Ur,” date from the mid-third millennium B.C., about 4,500 years ago. 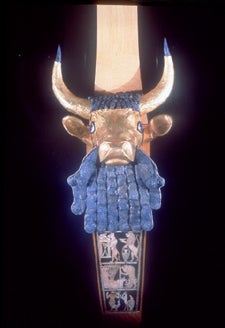 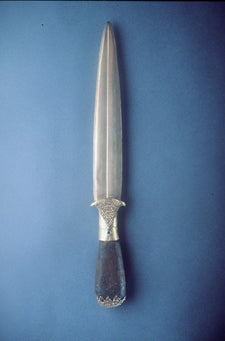 But it doesn’t take a specialist to see that these sculptures, pieces of jewelry, ritual vessels, and musical instruments, crafted from precious stones and metals and exquisitely preserved, are the products of a highly developed and sophisticated culture.

They were excavated by the pioneering archaeologist Leonard Wooley between 1922 and 1934 in an expedition sponsored by the British Museum and the University of Pennsylvania. Of the archaeological finds made in this century, only the discovery of Tutankhamen’s tomb in Egypt by Howard Carter in 1922 compares in terms of the splendor of the items unearthed or their impact on our knowledge of the ancient Near East.

Many of these items were found in the tomb of a woman identified as Lady Puabi. It is not certain whether she was a queen, a priestess, or both, although it is clear that she was a very important person, based on her elaborate and precious adornments and the fact that at least two attendants were buried with her, presumably alive.

The exhibition includes her burial headdress, made of lapis lazuli, carnelian, and gold leaves hammered to paper thinness. There are many other gold artifacts, still gleaming as brightly as when they were made – more jewelry, daggers, spear points, drinking cups, and animal heads. The gold weapons were ceremonial, not functional, intended, archaeologists believe, as gifts for the gods to assure preferential treatment in the underworld.

One of the most spectacular items is the “Great Lyre,” featuring a gold bull’s head adorned with a beard of lapis beads. The wooden body of the lyre disintegrated long ago, but conservators were able to reconstruct it from the indentation it left in the earthen floor of the tomb. The reconstruction is enhanced by a recording of what Sumerian music might have sounded like, based on cuneiform texts and studies of ancient instruments.

Another piece whose exquisite workmanship and perfect state of preservation are likely to astound is a statuette of a goat standing on its hind legs and browsing on the blossoms of a golden tree. The goat’s body is gold and its fleece is made from tiny, individually carved pieces of shell and lapis. He stands on a platform inlaid with diamond-shaped bits of precious stone.

So often, what remains of ancient cultures is so battered by time that a major effort of imagination is needed to reconstruct a notion of their grandeur. This exhibition is the exception. The items on display would be spectacular if they had been made yesterday. The fact that they were crafted 45 centuries ago makes them astonishing.

“Treasures from the Royal Tombs of Ur” is on display until September.