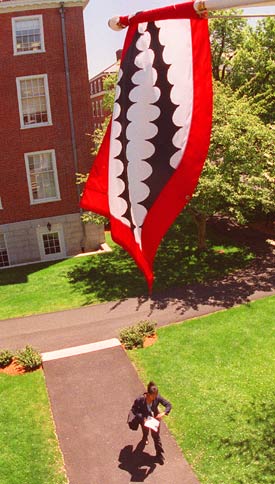 A scan of the list of the 51 fellows coming in 2002-03 (see list, page 6) reveals that seven of them study astrophysics. While they will pursue their own research during their year at the Institute, they will work alongside each other, swapping ideas and sharing resources with Harvard colleagues in the Earth and Planetary Sciences, Physics, and Astronomy departments.

Radcliffe Dean Drew Gilpin Faust points to this “cluster” of astrophysicists as exemplifying the new Radcliffe Institute for Advanced Study, which came into being as a result of the 1999 merger between Harvard University and Radcliffe College. A diverse yet accomplished group that includes six women, the astrophysicists embody the Radcliffe Institute’s mission to support advanced work across academic and creative disciplines while sustaining Radcliffe’s long commitment to women.

The presence of these rocket scientists – or, more accurately, astronomers and geophysicists and string theorists – on campus next year will bring the purpose and promise of the Radcliffe Institute into sharp focus as Radcliffe reinvents itself, yet again.

A history of explaining itself

“An institute for advanced study is a place where individuals pursue knowledge at its outermost limits,” Faust describes neatly. “It’s a place that’s dedicated to expanding the boundaries of knowledge and creating new knowledge.”

Founded as The Annex in 1879, Radcliffe College was born in 1894 to give women access to a Harvard education. Yet Radcliffe was always neither fish nor fowl: It was neither a coeducational college nor, like its sisters, an independent women’s college with its own faculty.

Throughout the 20th century, Harvard and Radcliffe moved jerkily toward coeducation. World War II brought men and women together for classes and some extracurricular activities, but women were kept at a physical distance from their male classmates, half a mile up Garden Street in women-only dorms. Until 1967, women were barred from Lamont Library.

In 1977, the infamous “nonmerger merger” transferred almost all responsibility for Radcliffe women – residential and extracurricular as well as intellectual – to Harvard’s control. In the following two decades, Radcliffe gradually loosened its ties to undergraduates and shifted its focus increasingly to research activity, supported by the Schlesinger Library, the Murray Research Center, and the Bunting Institute.

At last, a clear purpose

Faust, a Civil War historian who arrived in January 2001 from a prestigious teaching career at the University of Pennsylvania, thinks she has it easier than her predecessors in the explanation department.

“Being an institute for advanced study defines a path, a purpose, a goal,” she says. “I think Radcliffe College, once it lost its students, was struggling to define its purpose and a lot of people didn’t understand it.”

Like those institutes, the Radcliffe Institute has at its core a community of fellows, a legacy from the Bunting Institute. Founded in 1960 to give women in the arts and academia space, time, financial support, and community, the Radcliffe Fellowships are now extended to men as well as women. The competitive stipend fellowships convene a diverse community of scholars and artists for a year of inquiry and sharing.

Although Faust envisions more clusters of like-minded scholars such as the astrophysicists in future fellowship classes, she’s also committed to mixing it up. In particular, the cross-pollination between creative artists and academic scholars, at fellows’ colloquia and lunches and in the informal hallway chats between offices, is a hallmark of the Radcliffe Fellowships.

“I think that the Radcliffe Institute is the only place at Harvard where the creative arts and the critical disciplines are in such a close relation,” says Faust with pride.

The Radcliffe Institute’s inextricable connection to Harvard (it is now one of the University’s 10 Schools) makes it unique among institutes for advanced study.

“That is marvelous for us because it means that we can take advantage of the extraordinary resources all around Harvard, things ranging from libraries to museum exhibitions,” says Faust.

And, most importantly, Radcliffe can take advantage of Harvard’s faculty.

“Borrowing or stealing individuals, or parts of individuals, has been an important part of my agenda,” says Faust, not entirely in jest. While the merger specified that the Institute cannot retain its own faculty, it has created ways to share faculty with other schools to bring academic leadership to the Institute.

Artificial intelligence expert Barbara Grosz, Higgins Professor of Natural Sciences, and Malcolm Wiener Professor of Urban Studies at the Kennedy School Katherine Newman are deans for science and social science, respectively, at Radcliffe; they hold these positions in addition to their teaching appointments. Esteemed women’s historian Nancy Cott is Carl and Lily Pforzheimer Foundation director of the Schlesinger Library and a tenured faculty member of the history department, as is Faust herself.

Faust’s faculty pilfering beams benefits back to Harvard, too. Mahzarin Banaji, Richard Clarke Cabot Professor of Social Ethics and Carol K. Pforzheimer Professor at Radcliffe, holds the first of what Faust hopes will be several Radcliffe professorships that grant new tenured faculty four semesters as a Radcliffe Fellow. For Banaji, the time and freedom afforded by the fellowship was a powerful lure.

“The resource of that sabbatical did have impact on my decision” to join the Harvard faculty, Banaji told the Gazette earlier this spring. And, she added, “what is absolutely exhilarating is the idea having an office in one of those little Victorian houses on Concord amidst this rich group of scholars who are all there doing the same thing.”

While a community of scholars certainly awaits her, Banaji best not get too attached to an office on Concord Avenue, the site of the Bunting Institute.

With the help of planners Venturi Scott Brown, Radcliffe has embarked on a major assessment of its fragmented physical resources (in addition to Radcliffe Yard and the Concord campus, Radcliffe is landlord of Byerly Hall, home of the Faculty of Arts and Sciences [FAS] admissions office, and runs the Cronkhite Graduate Center).

The plan remains a work in progress, its realization far in the future, but it predicts that all the fellows will be gathered in Radcliffe Yard, where they can bump into each other regularly, fostering the kinds of intellectual interactions and casual connections that are at the core of the fellowships.

Consolidating physical space is but one challenge that looms for Faust as she steers the Radcliffe Institute into the future. Putting the Institute’s administrative and financial house in order, she has had to grapple with a model of college fundraising – soliciting donations from nostalgic alumnae – that is losing relevance.

“We need to make people interested in us because of what we do, not because they have a connection with us in the past,” she says.

Meeting that challenge, she says, will hinge on the Institute’s success in sharing its new mission and function with a broad audience.

“How do we disseminate the knowledge that we discover?” Faust poses. “How do we make intellectual connections with people both here at Harvard and in the wider world?”

Alumnae reaction to Radcliffe’s newest incarnation is mixed, predictably: some are grieving the loss of their college, while others, particularly younger alumnae who identified more with Harvard than Radcliffe, are embracing the Institute’s clear focus and new direction.

Still, Faust is upbeat, pointing to the swelling coffers of the Radcliffe Alumnae Professorship, an endowed Radcliffe Institute chair to be held by a tenured member of the Faculty of Arts and Sciences at Harvard, as evidence of ongoing support.

“In general, we’ve been feeling very optimistic about the growing enthusiasm and the willingness of alums to engage with the new institute and to support us, as well as about the Institute’s attractiveness to new donors who may not be alumnae,” she says.

The best job in higher education

In February, when FAS Dean Jeremy Knowles announced his return to the faculty and Faust’s name was floated as a potential replacement, she flatly denied the rumor, stating that she had “the best job in higher education.”

Like the fellows she helps recruit and support, Faust herself has a healthy appetite for expanding possibilities and creating something new, particularly within the context of resource-rich but tradition-bound Harvard.

“I see Radcliffe as the tub that crosses tubs,” she says, describing the Institute’s role as a “sparkplug,” a connector of people and resources within the University.

“We are the most supple part of the University,” she continues. “We can turn around on a dime, we can invent things, we can try things, and if it’s not a good idea it goes away. We don’t have to hire a tenured faculty member for life, we bring in a fellow for a year.”

Although Faust speaks of Radcliffe’s past with the loving respect of a historian, she revels in caretaking its future.

“The opportunity to build something new – when is there ever anything new in a university?” she says.