Baseball pours it on 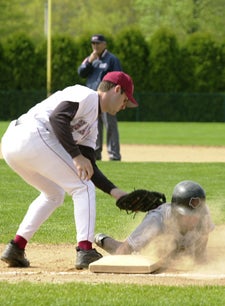 Close coverage
The Harvard baseball team scored two runs in the bottom of the ninth to beat Brown, 2-1, in a one-game playoff contest held Wednesday (May 8) at O’Donnell Field. With the victory, the Crimson clinched the 2002 Red Rolfe Division Championship. Harvard will host Princeton – the Lou Gehrig Division champs – in a best-of-three series this weekend (May 11-12) for the Ivy League title. The winner of that series will then advance to the NCAA Tournament as the Ivy League representative. The Crimson last won the Ivy title in 1999. First baseman Josh San Salvador ’02 (left) puts the tag on a Brown baserunner in an unsuccessful pick-off attempt in Wednesday’s action.