In a monastery in northern India, thinly clad Tibetan monks sat quietly in a room where the temperature was a chilly 40 degrees Fahrenheit. Using a yoga technique known as g Tum-mo, they entered a state of deep meditation. Other monks soaked 3-by-6-foot sheets in cold water (49 degrees) and placed them over the meditators’ shoulders. For untrained people, such frigid wrappings would produce uncontrolled shivering.

If body temperatures continue to drop under these conditions, death can result. But it was not long before steam began rising from the sheets. As a result of body heat produced by the monks during meditation, the sheets dried in about an hour.

Attendants removed the sheets, then covered the meditators with a second chilled, wet wrapping. Each monk was required to dry three sheets over a period of several hours.

Why would anyone do this? Herbert Benson, who has been studying g Tum-mo for 20 years, answers that “Buddhists feel the reality we live in is not the ultimate one. There’s another reality we can tap into that’s unaffected by our emotions, by our everyday world. Buddhists believe this state of mind can be achieved by doing good for others and by meditation. The heat they generate during the process is just a by-product of g Tum-mo meditation.”

Benson is an associate professor of medicine at the Harvard Medical School and president of the Mind/Body Medical Institute at Beth Israel Deaconess Medical Center in Boston. He firmly believes that studying advanced forms of meditation “can uncover capacities that will help us to better treat stress-related illnesses.”

Benson developed the “relaxation response,” which he describes as “a physiological state opposite to stress.” It is characterized by decreases in metabolism, breathing rate, heart rate, and blood pressure. He and others have amassed evidence that it can help those suffering from illnesses caused or exacerbated by stress. Benson and colleagues use it to treat anxiety, mild and moderate depression, high blood pressure, heartbeat irregularities, excessive anger, insomnia, and even infertility. His team also uses this type of simple meditation to calm those who have been traumatized by the deaths of others, or by diagnoses of cancer or other painful, life-threatening illnesses.

“More than 60 percent of visits to physicians in the United States are due to stress-related problems, most of which are poorly treated by drugs, surgery, or other medical procedures,” Benson maintains.

The Mind/Body Medical Institute is now training people to use the relaxation response to help people working at Ground Zero in New York City, where two airplanes toppled the World Trade Center Towers last Sept. 11. Facilities have been set up at nearby St. Paul’s Chapel to aid people still working on clearing wreckage and bodies. Anyone else who feels stressed by those terrible events can also obtain help at the chapel. “We are training the trainers who work there,” Benson says.

The relaxation response involves repeating a word, sound, phrase, or short prayer while disregarding intrusive thoughts. “If such an easy-to-master practice can bring about the remarkable changes we observe,” Benson notes. “I want to investigate what advanced forms of meditation can do to help the mind control physical processes once thought to be uncontrollable.”

Some Westerners practice g Tum-mo, but it often takes years to reach states like those achieved by Buddhist monks. In trying to find groups he could study, Benson met Westerners who claimed to have mastered such advanced techniques, but who were, in his words, “fraudulent.”

Benson decided that he needed to locate a religious setting, where advanced mediation is traditionally practiced. His opportunity came in 1979 when the Dalai Lama, spiritual leader of Tibet, visited Harvard University. “His Holiness agreed to help me,” recalls Benson. That visit was the beginning of a long friendship and several expeditions to northern India where many Tibetan monks live in exile.

During visits to remote monasteries in the 1980s, Benson and his team studied monks living in the Himalayan Mountains who could, by g Tum-mo meditation, raise the temperatures of their fingers and toes by as much as 17 degrees. It has yet to be determined how the monks are able to generate such heat.

The researchers also made measurements on practitioners of other forms of advanced meditation in Sikkim, India. They were astonished to find that these monks could lower their metabolism by 64 percent. “It was an astounding, breathtaking [no pun intended] result,” Benson exclaims.

To put that decrease in perspective, metabolism, or oxygen consumption, drops only 10-15 percent in sleep and about 17 percent during simple meditation. Benson believes that such a capability could be useful for space travel. Travelers might use meditation to ease stress and oxygen consumption on long flights to other planets.

In 1985, the meditation team made a video of monks drying cold, wet sheets with body heat. They also documented monks spending a winter night on a rocky ledge 15,000 feet high in the Himalayas. The sleep-out took place in February on the night of the winter full moon when temperatures reached zero degrees F. Wearing only woolen or cotton shawls, the monks promptly fell asleep on the rocky ledge, They did not huddle together and the video shows no evidence of shivering. They slept until dawn then walked back to their monastery.

Working in isolated monasteries in the foothills of the Himalayas proved extremely difficult. Some religious leaders keep their meditative procedures a closely guarded secret. Medical measuring devices require electrical power and wall outlets are not always available. In addition, trying to meditate while strangers attempt to measure your rectal temperature is not something most monks are happy to do.

To avoid these problems, Instructor in Psychology Sara Lazar, a Benson colleague, used functional magnetic resonance imaging to scan the brains of meditators at Massachusetts General Hospital in Boston. The subjects were males, aged 22-45, who had practiced a form of advanced mediation called Kundalini daily for at least four years. In these experiments, the obstacles of cold and isolation were replaced by the difficulties of trying to meditate in a cramped, noisy machine. However, the results, published in the May 15, 2000, issue of the journal NeuroReport, turned out to be significant. 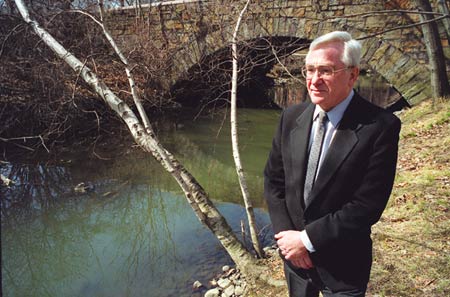 Herbert Benson, who developed a simple relaxation technique to reduce stress, enjoys a quiet moment at a placid stream near his office in Boston. He directs a study of advanced meditation to uncover capabilities that may help treat stress-related illnesses. (Staff photo by Kris Snibbe)

“Lazar found a marked decrease in blood flow to the entire brain,” Benson explains. “At the same time, certain areas of the brain became more active, specifically those that control attention and autonomic functions like blood pressure and metabolism. In short, she showed the value of using this method to record changes in the brain’s activity during meditation.”

The biggest obstruction in further studies, whether in India or Boston, has always been money. Research proceeded slowly and intermittently until February 2001, when Benson’s team received a $1.25 million grant from Loel Guinness, via the beer magnate’s Kalpa Foundation, established to study extraordinary human capacities.

The funds enabled researchers to bring three monks experienced in g Tum-mo to a Guinness estate in Normandy, France, last July. The monks then practiced for 100 days to reach their full meditative capacity. An eye infection sidelined one of the monks, but the other two proved able to dry frigid, wet sheets while wearing sensors that recorded changes in heat production and metabolism.

Although the team obtained valuable data, Benson concludes that “the room was not cold enough to do the tests properly.” His team will try again this coming winter with six monks. They will start practice in late summer and should be ready during the coldest part of winter.

Benson feels sure these attempts to understand advanced mediation will lead to better treatments for stress-related illnesses. “My hope,” he says, “is that self-care will stand equal with medical drugs, surgery, and other therapies that are now used to alleviate mental and physical suffering. Along with nutrition and exercise, mind/body approaches can be part of self-care practices that could save millions of dollars annually in medical costs.”

Meditation… Here the heart/May give a useful lesson to the head. – Cowper