By Photo and text by Jon Chase 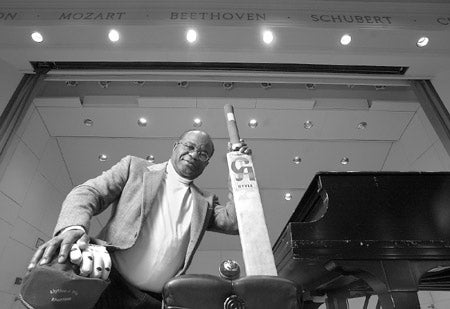 The father had high expectations for his son, hoping perhaps that he would write great literature one day. So he named the child Shakespeare, no small burden for a boy brought up on a farm on the West Indian island of Dominica. And with a surname of Christmas, you might expect a personage as windy and colorful as a Dickens character. But Shakespeare Christmas, known to his friends as Chris, is a shy, unassuming man of 54 who works as a custodian in the Music Department at Paine Hall. He acknowledges falling short of his father’s grandiose goals, but is content, he says, to have helped pave the way for his own children.

When Chris was 16 his father died. The boy left school and took over the family farm. It was hard work, but he enjoyed being his own boss. He grew bananas, coconuts, cocoa, and coffee, grapefruit, oranges, potatoes, and yams.

He came to this country by himself in 1981, joined a year later by his wife and three children. After finding work at a Boston-area hotel, Chris soon discovered he needed to supplement his income. He then began work doing dry cleaning, and for 10 years he worked both jobs back to back, 16 hours a day.

Chris started at Harvard part time in 1995, becoming full-time four years later. For him, the job has meant putting food on the table, but it has also been a means toward another end – giving his children the education he never had. “I put my knees on the floor, empty the trash, and clean the toilets,” he says, “so my children will not have to do the same thing.”

Chris let his children know early what was expected: School was their job. They would complete high school (D’s were unacceptable grades), and then go on to college. Sunday mornings after church, during his scarce time off, he would sit with the kids, books strewn about the floor, and have them take turns reading. Chris’ efforts paid off. All three children went to college, and currently work as an electrical engineer, an accountant, and a sociologist.

Chris has six brothers and four sisters here in Boston. Of his mother’s 16 children, 14 are still living. He is in touch with virtually all of his immediate family. The next generation grows almost geometrically: his mother has 92 descendents in the Boston area alone, and a total of nearly 200 around the globe.

On the island of Dominica families are tight-knit. The Christmases in Boston are no different. Each weekend Chris and his siblings speak by phone, discussing their children. They talk about who needs financial help, about who is having discipline problems, about who might be struggling in school or in relationships, and together they work to find a solution.

The Dominican sense of community is likewise firmly rooted, and Chris maintains that tradition in his role as president of the Spartan Cricket Club, which he helped found in 1985. Chris organizes the schedule, makes travel arrangements, conducts team meetings, and oversees club finances. The club, consisting mostly of fellow West Indians, plays cricket on weekends, sometimes traveling to Connecticut or New York state for a game. Last summer, the club traveled to St. Croix; this August they will go to Dominica for two games – interspersed with family visits.

Chris’ plans for retirement include building a bakery on land not far from his 15-acre homestead in Dominica. Why a bakery? When he was young, Christmas remembers everyone eating locally baked fresh bread, but now people buy their staples outside the community. He’d like to bring back an earlier, healthier time.

His children may not completely understand his commitment to retiring to his homeland, Chris fears, but he says, “I have too much history there to not go back, despite the offers of good money for the land. There’s nothing more important than community. In fact,” he adds, “all of Dominica is one big community.”

So Shakespeare Christmas will go back to his roots, grateful for the opportunity this country has given him, but knowing full well that some of the old traditions are worth holding onto.