The National Cancer Institute has awarded Harvard a $40 million chemistry grant to develop a laboratory that will dramatically enhance researchers’ ability to find the proteins involved in disease and identify agents that can manipulate them. 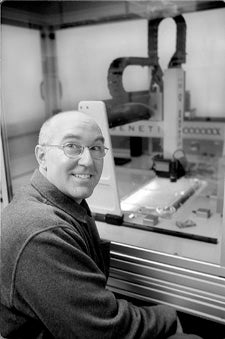 Stuart Schreiber, Morris Loeb Professor and chair of the Chemistry and Chemical Biology department, will direct the new Molecular Target Laboratory (MTL), under the aegis of both the Faculty of Arts and Sciences (FAS) and Harvard Medical School (HMS). Schreiber defines the MTL’s goal as “a systematic approach to chemical genetics.” The MTL will build on the efforts of the Harvard Institute of Chemistry and Cell Biology (ICCB), a collaboration between FAS and HMS, born out of the Department of Chemistry and Chemical Biology in 1997, to develop the field of chemical genetics. Schreiber has, with HMS biologist Timothy Mitchison, co-directed the ICCB since its inception.

Chemical genetics attempts to understand biological and medical processes by “perturbing” those processes using small molecules, and studying the response. A powerful new development in chemistry – diversity-oriented synthesis (dos) – has provided a recipe for synthesizing those small molecules efficiently. “Dos provides a new universe of small molecules with great promise for perturbing biology and medicine with exquisite specificity,” Schreiber says.

The MTL aims to systematically identify the small molecules that can activate or inactivate each individual function of each protein in the human genome sequence. These molecules can serve as research starting points for therapeutic drugs.

“Systematic approaches generate staggering quantities of data,” Schreiber says. “It is essential that we integrate state-of-the-art information science from the outset in order to retrieve and mine the rich data sets derived from systematic chemical genetics.”

A primary goal of the MTL is to develop a public database, “ChemBank,” that would comprehensively link biological and medical processes to the proteins responsible for each process, and place in the public domain many of the small molecules that can fuel future drug research. “Such a database becomes a discovery engine and a hypothesis-generating mechanism,” Schreiber says.

The MTL’s strength will derive as well from intensive collaboration with the ICCB, the Bauer Center for Genomics Research, and the Harvard Institute of Proteomics, whose work in genomics, proteomics, and chemical biology inform each other in important ways.

“The MTL will facilitate the building of bridges between the Department of Chemistry & Cell Biology and the biomedical, engineering, and information science communities at Harvard,” Schreiber says.

Dean of the Faculty of Arts and Sciences Jeremy R. Knowles says, “This is an extremely exciting and important step that Professor Schreiber is taking. He has secured these major resources to link (as his proposal says) ‘the great diversity of biological space with that of chemical space.’ The project aims to establish a vast and structurally diverse library of small molecules and to use this library systematically to explore the effects on a host of biological pathways. The old paradigms have shifted!”