Jeremy R. Knowles, Dean at Harvard, to Return to the Faculty

By Photo by Jon Chase Text by Alec Solomita 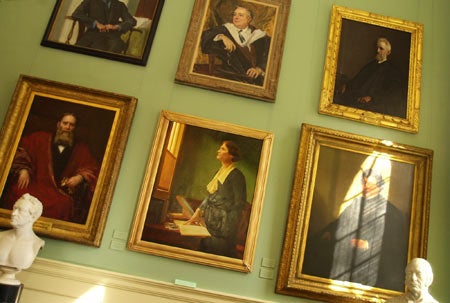 When “little Dutch master” Jan Vermeer painted “The Astronomer” in the 1660s, Johannes Kepler had already discovered the laws of planetary motion, Galileo had tangled with the church over his heliocentric convictions, and Isaac Newton was crashing at his parents’ house (to dodge the plague) and formulating the laws of gravitation and motion.

The painting, along with its companion piece, “The Geographer,” was a tribute to these men and their missions, a tribute to empirical research, to clarity, and to the “light of reason.” And, as in all of Vermeer’s work, light was a key player in both paintings. The astronomer sits at his desk in profile facing a window through which a golden light filters, causing the scholar’s desk, globe, and books to glow with a very unscientific-like spirituality. The same composition and lighting, proclaiming the mystery and beauty of intellectual pursuit, characterize “The Geographer,” who gazes pensively out of his window.

When American master Patricia Watwood was commissioned to paint a portrait of Cecilia Payne-Gaposchkin in the fall of 2000, the painter looked back to Vermeer for inspiration, choosing his “The Astronomer” as the source for her painting. It was an apt decision.

Payne-Gaposchkin’s story is, like those of many 17th century astronomers, an inspiring one. But she faced obstacles every bit as formidable as some of her male predecessors. In her autobiography, “The Dyer’s Hand,” Payne-Gaposchkin makes her priorities — and her clearsightedness — apparent: “Do not undertake a scientific career in quest of fame or money. There are easier and better ways to reach them. Undertake it only if nothing else will satisfy you … Your reward will be the widening of your horizon as you climb.”

Artist Watwood uses almost-forgotten classical painting techniques to execute her portraits and still lifes, linking her work to a long, admirable artistic tradition. Her portrait of Payne-Gaposchkin illuminates (as the scholar is illuminated at her window) the astronomer’s doggedness, imagination, and commitment while linking her to a long scientific tradition of inquiry and courage.

The painting was unveiled recently in the Faculty Room in University Hall.