Learning from a charismatic master of improvisation

You can see it in the way he moves – lithe, restless, totally unselfconscious; the way he hunches barefoot on a piano stool, grunting, growling, and chirping a wordless song into the mike; the way his fearlessly engaging eyes peer through the curtain of his dreadlocks before he flings the long, straight cords back over his shoulder or ties them in a knot atop his head; the way he cheerfully scribbles his name on CDs handed to him shyly by awed fans; the way he scurries among the two or three dozen members of a rehearsal audience, shaking hands with each one, elated by the sheer joy of human contact.

But mostly it is apparent when he sings, reveling in the spaciousness of his four-octave range and in his ability to imitate every sound from the blare of a trumpet to the burp of a talking drum to the rattle of a dragonfly’s wing.

McFerrin was at Harvard for four days this past week, working with student singers, dancers, and musicians as part of the Office for the Arts’ Learning From Performers series. As he worked with these groups he seemed to generate a kind of magic, a charmed circle of artistic permissiveness where all things were possible. 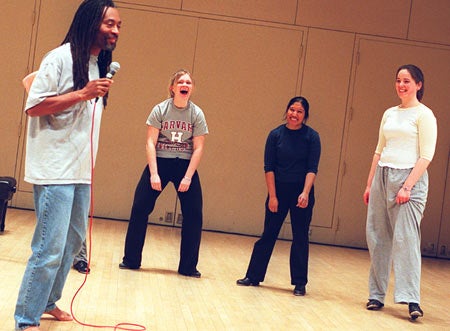 On Sunday, he was in Lowell Hall working with Harvard dancers. On the spot, McFerrin improvised a song for each dancer to move to, each one different and each seemingly inspired by the dancer’s individual characteristics. Adopting a Robin Williams-like succession of accents, he soon persuaded his young collaborators not to take themselves too seriously. Fun and self-discovery, not criticism was the order of the day.

“All of these ideas are good ideas,” he said as the dancers threw out proposals for new improvisations. “It’s all good, it’s all good.”

During an improvisation, one dancer made a mistake and apologized.

“I forgive you,” McFerrin sung, drawing out the words like a recitative from a Puccini opera.

Monday at Sanders Theatre, McFerrin showed up in jeans, a Harvard sweatshirt, and hiking boots, accompanied by the Harvard Jazz Band. He walked to the piano and played a few chords, then swung into a rendition of “Autumn Leaves,” scatting for a few choruses and trading four-bar phrases with the bass player. 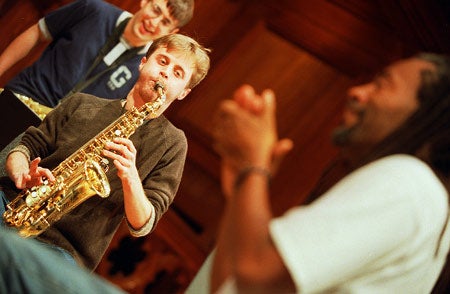 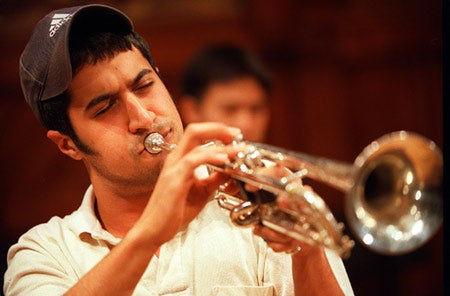 Several more jazz standards followed, “All Blues” and “Take the A Train” among them. After a while it was apparent that McFerrin was not simply singing with the band, he was leading it into new territory, suggesting unthought-of possibilities with his vocalizations, using quick, encouraging gestures and facial expressions to direct the players along new paths.

About an hour into the session, he got them going on a slow, funky blues. This time they were truly on an adventure. There was no telling what might happen as McFerrin snarled and shouted into the microphone, pushing the band along with his astonishing vocal improvisations.

“These guys are playing better than I’ve ever heard them before,” said Jazz Band director Tom Everett, listening to the performance from the sidelines. “What I’ve been trying to get them to do for three years, he’s done in about five minutes.”

On Tuesday, it was the a cappella groups’ turn. The Veritones, The Din and Tonics, and the Radcliffe Pitches each arranged themselves onstage and performed two or three of their best numbers while McFerrin listened intently, leaning on the seat back in front of him and occasionally tapping out a rhythm or vamping softly along with the backup singers. 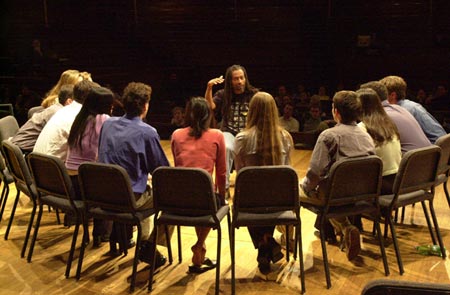 Afterward, he picked one number to work on with each group. The changes he suggested were subtle, adding an extra syllable here, a new emphasis there. But each time the numbers seemed to become fresher, more alive.

After the session, putting on a comically affected British accent, he asked if there were questions.

“Will you sing something?”

McFerrin put the chordless mike to his lips and began. Or rather several McFerrins seemed to be singing almost simultaneously, one doing an African-sounding chorus of gulps and clicks, another keening a series of not-quite-intelligible verses, and a third singing call and response. He followed that with a Bach prelude, then Rimsky-Korsakov’s “Flight of the Bumblebee.”

“It’s not that tough,” he told his open-mouthed listeners. “The notes are really close together. If they were far apart, it would be impossible.”

“What’s your favorite instrument to vocalize?”

“The voice is my favorite instrument. We’re so lucky. Our vocal palette is so large.”

“Are you imaging the instruments to yourself when you imitate them?”

“Where do your ideas come from?”

“You just dig inside yourself and you pull something out. When I’m composing, I just sit down at the piano, and the first thing I think of, I go with.”

“Is it true you didn’t start singing until you were 27?” 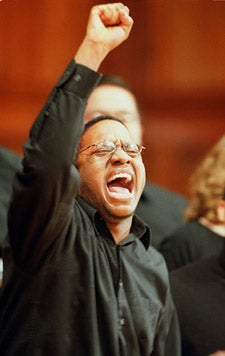 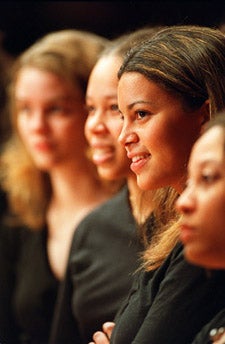 McFerrin fires up his audience, as evidenced by the enthusiasm of law student Jason Hines. (Staff photo by Justin Ide)