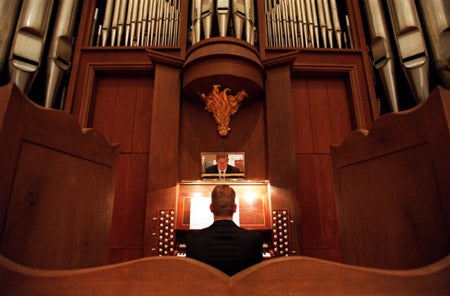 Robert Jan August’s hands fly across the Fisk Organ’s four keyboards, fingers pausing and crossing to deftly punch a button or pull out a stop. His feet dance along the pedals, playing a counterpoint to the melody. Above him, the organ’s pipes shimmer and boom, swell and fade as Bach trumpets across Appleton Chapel and into the Memorial Church.

August is one of two organ scholars who work under University Organist and Choirmaster Murray Forbes Somerville to provide music for activities at the Memorial Church, including Morning Prayers and Sunday services. A doctoral student at New England Conservatory, August is in his second year at the Harvard job and has studied organ since he was 7. “Most people start with piano, but my parents had a little organ and they thought it might be good to give me a little musical background,” says the Holland native.

One of Holland’s few Mormons, August says he is religious, but while he’s playing the demands of his job often prevent him from appreciating its more spiritual side. Ministers will sometimes stray from the order of service, says August, choosing to skip a prayer or give the congregation a second shot at a hymn. August must stay on his toes to avoid a major sonic gaffe like sounding the opening chords of a hymn as the congregation is about to pray.

August has to compensate for distance when he accompanies the choir, playing as if he’s rushing the music. The span between him and the congregation makes the challenge greater. “When you play hymns, you cannot listen to the congregation, because it always sounds half a second late. If you wait for them, you will go slower and slower,” he says.

Quickly naming Bach as his favorite composer – “to me, his music is complete. It’s got everything” – August also has a soft spot for rock, and played bass in a heavy metal band called Anguish. “We would play on a Saturday night and I would say, ‘It’s 2 a.m., this is going to be our last song because there’s church tomorrow,'” he says.

Heavy metal detours aside, August’s passion for the organ is unswerving. “It’s so diverse,” he says, pulling out stops and pushing knobs to demonstrate an entire orchestra of sounds. “It can be very intimate and very big and powerful. It’s like a good relationship.”