The spotted hawk swoops by and accuses me,
he complains of my gab and my loitering.
I too am not a bit tamed, I too am untranslatable,
I sound my barbaric yawp over the roofs of the world. — Walt Whitman

Winter is the time that most of nature slumbers, saving its energy for spring’s coming burst. But that slumber presents opportunities for those wide awake and kicking, despite the cold.

Red-tailed hawks, Harvard Yard residents for several years, are alert and watchful now. Recently, they treated the sharp-eyed to a view of nature’s spectacle that might have been hidden by the leaves of summer or fall. 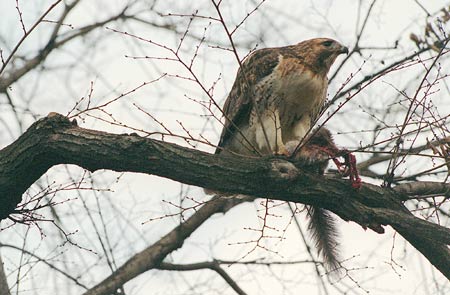 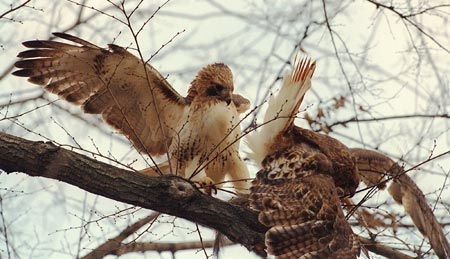 In a display of both the nearness and harshness of nature, a male red-tailed hawk feeds on a newly caught squirrel in front of Massachusetts Hall (right). After a few minutes, the female swoops down (below) and snags her share of the prey. Snatching one of the Yard’s many squirrels, the hawks shared the meal high up in a tree, helping sustain themselves for the coming weeks of cold — and perhaps for the breeding season beyond.

“It’s not bad [hawk habitat],” David Lange, a 23-year birdwatcher and member of the Nuttall Ornithological Club, the nation’s oldest birding club, said of Harvard Yard. “It has a good food source in terms of squirrels. They occupy other urban niches.”

Lange, an electron microprobe specialist in the Department of Geological Sciences, said the Harvard birds are one of several pairs of red-tailed hawks within the Route 128 beltway, including some at nearby Mt. Auburn Cemetery.

Lange said it’s not unusual for the hawks to share food, as it reinforces the bond between male and female. It also helps prove that they are good providers for the brood to come. 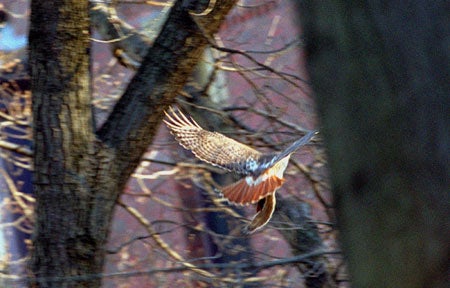 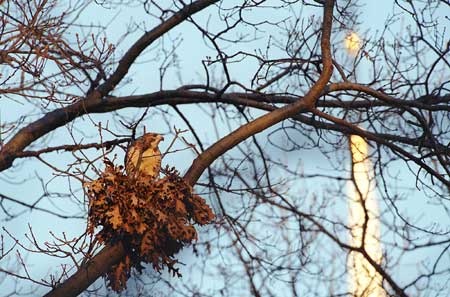 The female then glides silently through the Yard (right), her meal snugly tucked into her talons. A few moments later she is perched regally in her leafy nest (below), satisfied for the moment, perhaps, but also seemingly on the lookout for future meals. Red-tailed hawks are common across the United States and often soar on their 1.5-meter wings or perch on high places to survey the area below for prey. Holyoke Center is a convenient perch for Harvard’s hawks. They’ll sometimes settle on a balcony railing, oblivious to the office workers inside even as they are ever watchful of the Yard below.

If they did turn and focus their far-seeing eyes on the loiterers and gabbers within, would they see tame others or, as Whitman suggests, wild things like themselves?