At Perkins School, tutoring is hands-on

Undergrads teach, and learn from, students

For a sighted person, blindness is a frightening prospect. Finding one’s way, avoiding danger, interacting with strangers – without vision such tasks seem challenging to the point of insuperability.

But those who must make their way in the world without sight cannot afford to be intimidated.

Take Ian Perrault, for example. Seventeen and blind since birth, he expresses his feelings about his handicap with characteristic assertiveness:

A student at the Perkins School for the Blind in Watertown, Perrault has already proven that in many important ways the mind can compensate beautifully for sensory deficits. Not only does Perrault read fluently in Braille and use a computer equipped with a speech synthesizing program called JAWS, but he can also navigate large portions of the Boston area as a result of having committed the bus and train systems to memory.

But even a mind as accomplished as Perrault’s needs help sometimes. Like any teenager faced with the task of mastering a full range of academic subjects, Perrault can sometimes use a little tutoring, and this is where Aalap Mahadevia enters the picture.

Mahadevia is a Harvard junior and co-director of the Committee on the Blind, a public service organization associated with Phillips Brooks House (PBH). Since September 2000 he has been spending one hour a week with Perrault as a tutor and friend.

Last year, the two spent a lot of time reviewing biology. This year, vocabulary has taken up a good part of their time. But for both of them, the nonacademic aspect of their visits together is the part they both enjoy.

“We spend a lot of time just talking,” Perrault said. “That’s what I really like, getting to know one another.”

Mahadevia agrees. “Harvard can be very stressful. Coming here gives you a little bit of perspective. You see the bigger picture. What I’m so impressed with in Ian is that he’s so outgoing and positive.” 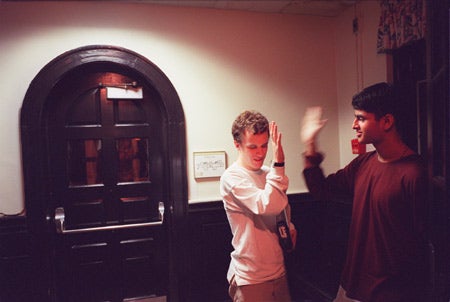 The two have spent time away from the school as well. To celebrate the completion of Perrault’s 2001 summer session, they took the T to Boston and had lunch at Eagle’s Deli in Cleveland Circle. Perrault ordered the Godzilla Burger (a pound of beef, four slices of cheese, and a pound of fries) and got his photo on the wall as a prize for finishing it.

“Your plate has to be spotless!” he said.

Mahadevia, who does not eat beef, enjoyed his plate of chicken fingers.

Now both find themselves in the Boston area, Mahadevia at the nation’s oldest University and Perrault at the oldest school for the blind (established in 1829, the Perkins School lists Helen Keller among its alumni).

Both are still a bit vague about their plans for the future. Mahadevia, a government concentrator, thinks he may join the Peace Corps after graduation, then go to law school, but he hasn’t quite made up his mind. Perrault thinks he’d like to work in computers, possibly as a software developer, but at this stage he is more concerned about getting through high school.

But thanks to the PBH program that brought them together, each of them can count on the other for help in reaching his goals.