By Photo by Jon Chase Text by Beth Potier 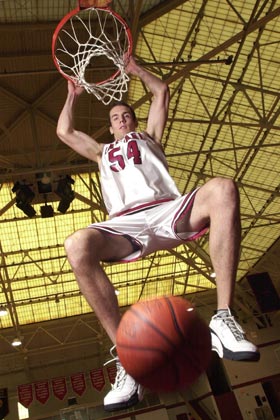 Brian Sigafoos ’03 can’t really describe what it’s like to be tall. “It’s all I know. Everyone else seems pretty short to me,” says Sigafoos, who stands at 7 feet in his size 17 sneakers.

Not surprisingly, Sigafoos plays basketball. As center for the Crimson team, he admits that he’s off his game this season compared with last, when he scored 17 points in his final game. His scoring this year stands at just 16 points over six games. “I feel like things are going to go better for me,” he says. “I just gotta get it back, but I will, I definitely will.”

Height and basketball have been constant throughout Sigafoos’ life. Instead of the common pubescent growth spurt, he consistently grew up to 6 inches year after year. “So I was always pretty coordinated,” he says. By early adolescence, at 6 feet 6 inches, he had topped out his doctor’s measuring apparatus; his height was tracked from then on by a mark on the office wall that said “Brian’s height.” Between ages 10 and 17, Sigafoos says, his shoe size kept pace with his age.

Sigafoos’ basketball career began at the local YMCA when he was 5 years old. “I got pretty serious pretty quick,” he says, and by high school he was playing in a very competitive summer league in Newark, about 45 minutes from his home in Basking Ridge, N.J.

“That was my best experience in basketball, until I came to Harvard,” he says. “My mom had the foresight to find this team for me and push me to go there. It was a great fit.” It expanded his cultural horizons as well as his basketball skills: Sigafoos traveled extensively with the team and was the Newark Rams’ only white player. “It certainly showed me a different side of life.”

A psychology concentrator, Sigafoos hopes to play professional basketball after Harvard, although he acknowledges that a career with the NBA is a long shot. “I went to the wrong school to do that,” he says. While Crimson hoops keeps him in the gym for hours every day during the six-month season, Harvard’s academic demands prevent him from focusing his entire college career on the game, like players at top basketball schools do.

“My ideal situation would be to go to Europe somewhere and play professionally there,” he says. France, where his girlfriend lives, is his top choice.

Sigafoos says that his height brings a few disadvantages – attention from strangers, having to order shoes through a catalog – but many more pluses. “I like how tall I am,” he says. “You have to embrace it, be positive, enjoy it. I’m certainly not going to change it – I might as well enjoy it.”