By Photo by Rose Lincoln Text by Beth Potier 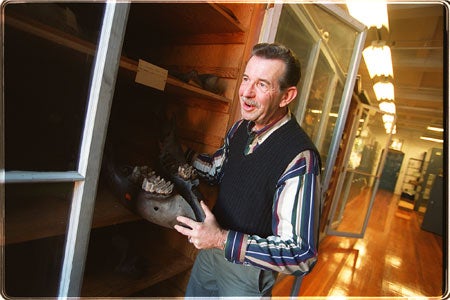 Make no bones about it: Charles Schaff loves his job.

As curatorial associate for the Museum of Comparative Zoology’s (MCZ) vertebrate paleontology department, Schaff oversees a collection of several hundred thousand bones, primarily fossils. He prepares, catalogs, and loans the collection, which lives in three rooms of steel cabinets fitted with drawers.

“It’s like a big warehouse full of parts of animals that existed through time,” says Schaff. The bulk of the collection comes from the late Triassic period, about 225 million years ago. “I do have some recent stuff here,” he says. “It’s from about 10,000 years ago. That’s young.” Researchers use the collection to connect the evolutionary dots among the vertebrates – mammals, reptiles, fish, birds, and amphibians.

More than just a caretaker, Schaff also adds to the collection, joining his colleagues on one or two collecting trips each year to fossil hot spots around the globe. He’s gone on expeditions to Asia, Argentina, Greenland, Africa, and the deserts and mountains of the American West. He points proudly to a fierce-looking skeletal creature on his desk. “That’s one of my best finds,” he says, recalling the story of discovering the fossil of this cat-sized mammal, called Gobi conodon, on a hot day in 1974 in Montana.

Schaff grew up in New York City where, he admits, fossil finds are few. As a kid, he says, “I liked to wander around and explore. Paleontology is not that different: You’re hiking around, looking at things.” Schaff found his way to New York’s American Museum of Natural History, where he fueled his passion for fossils. College took him west, “where the fossils were,” to West Texas State University. There, he went on expeditions and learned the craft and science of paleontology. After stints at museums at Princeton and Yale, Schaff came to the MCZ in 1970.

Schaff credits his two decades of job satisfaction to the variety his work encompasses as well as his passion for discovery. “The search for knowledge in the past is really the key to understanding everything,” he says. “You look at these old bones, you try to put them together in your head. I think it’s fascinating.” We serve the public interest! Interesting people, interesting jobs, interesting hobbies  we want them in the Big Picture. If you have an idea for the Big Picture, give us a buzz at big_picture@harvard.edu