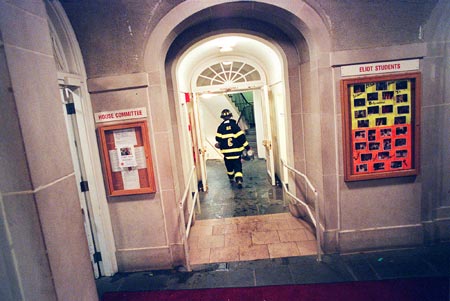 Grill fire forces Eliot House evacuation
A fire in the Eliot House Grille, located in the basement below M-Entry, forced the evacuation of approximately 430 Eliot House students Sunday, Nov. 11, shortly after 8 p.m. Students in nearby Kirkland House were also temporarily evacuated as a precaution. No injuries were reported. Thick black smoke was reported coming from the basement common room, which contained the grill. Residents were allowed to return to their rooms by 1:15 a.m on Monday. (Staff photo by Stephanie Mitchell)