Football takes home all the marbles

By Text by Andrew Brooks Staff photos by Justin Ide

With the hoisting of the Ivy cup, the Harvard football team’s dream season suddenly became very real on Saturday, Nov. 17. In beating rival Yale, 35-23, in the 118th playing of the Game, the Crimson won its 10th Ivy League Championship and fourth outright crown, while extending its perfect season to 9-0. Not since 1913 has Harvard waged an unbeaten, untied campaign. 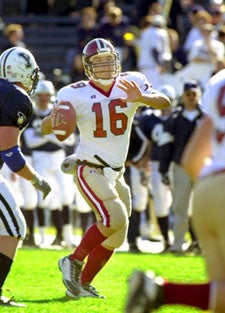 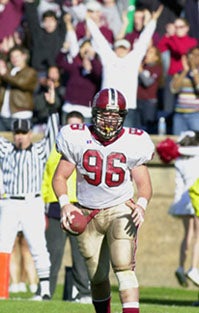 Harvard’s Neil Rose ’02 looks for a receiver during first half action in New Haven on Nov. 17. Rose and Harvard went on to win the Game, 35-23, and the Ivy League Championship. With a background fan and referee showing there’s no doubt about it, Matt Fratto ’04 (left) scores one of his two second-quarter touchdowns, both from passes by quarterback Neil Rose ’02.

In a season of rare distinctions, Morris was also recently named the league’s most outstanding player by way of the Asa S. Bushnell Trophy. He becomes the first Harvard player in more than 25 years to receive the prestigious award.