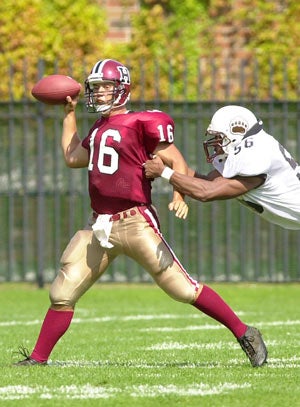 Sept. 22
Harvard 27, Brown 20
In the season opener, the Crimson unveiled a new weapon in tailback convert Josh Staph ’02. Down 17-7, the former fullback scored two of his three touchdowns in the third quarter, giving Harvard a 20-17 lead. With 5 minutes remaining, quarterback Neil Rose ’02 and Carl Morris ’03 broke a 20-20 standstill, connecting on a 9-yard game-winning pass.

Oct. 6
Harvard 35, Northeastern 20
A breakthrough performance for the Harvard defense. Seconds before halftime, junior John Perry picked up a fumble and went 85 yards for a touchdown. Late in the third quarter, Brendan McCafferty ’04 clinched the game, returning another dropped ball 19 yards for the Crimson’s final score.

Oct. 27
Harvard 31, Dartmouth 21
Any lingering doubts regarding Harvard’s tenacity evaporated as the team rallied from a 21-point halftime deficit to defeat Dartmouth. With Fitzpatrick at the helm (262 yards on the day), the Crimson clawed back in the largest come-from-behind victory in the program’s 128-year history.

Nov. 3
Harvard 45, Columbia 33
Freshmen quarterback Garret Schires made his first collegiate appearance after both Rose and Fitzpatrick were sidelined with reoccurring injuries. The Crimson managed to build a 38-7 first half lead with business-as-usual play from Nick Palazzo (132 yards on 18 carries) and Carl Morris, who set a school record with 1,991 career receiving yards.

Nov. 10
Harvard 28, Penn 21
A defensive clampdown late in the action (two sacks and a blocked punt) secured the Crimson victory in the battle of the undefeated, giving Harvard at least a share of the Ivy League title. Rose and Morris conspired for two touchdowns, as the junior receiver continued to break school records, including 66 catches in a single-season, and 150 career receptions.