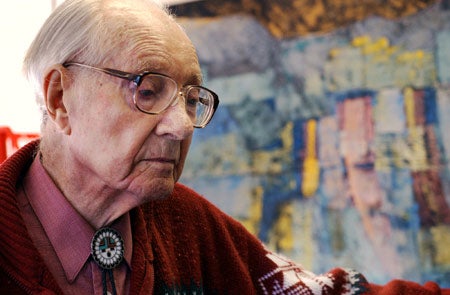 Fred Whipple enjoys solving problems. Like the time he was working for the Air Force during World War II and came up with the idea for chaff – little bundles of shredded aluminum foil that could be dropped from U.S. aircraft to confuse the German radar. Air Force wits dubbed him the Chief of Chaff as a result.

But chaff was only a sideline in Whipple’s long and distinguished career as an astronomer. Less vital to the country’s military interests, but of greater intellectual significance was the problem of what comets are made of. The prevailing view had been that they were loose bundles of rocky particles – the sandbag model.

But Whipple knew that some comets have been orbiting the sun a thousand times and more. If they were nothing but sand, they would have broken up by now. In 1950, he published a paper suggesting they were “icy conglomerates,” what the press called “dirty snowballs.” As the comet came closer to the sun, the ice boiled away and formed the spectacular coma, or tail. In 1986, the Giotto Mission came close enough to Haley’s Comet to photograph its nucleus. Sure enough, it looked just the way Whipple described it 36 years before.

Whipple, the Phillips Professor of Astronomy Emeritus, will be 95 next month. Although he no longer bikes from his home in Belmont, as he did for 48 years, he still comes Monday through Friday to his office at the Harvard-Smithsonian Center for Astrophysics where he keeps up with the latest scientific literature and maintains his correspondence with colleagues, students, and fans. On the wall, a photo of one of the center’s buildings is labeled “The House That Fred Built.”

“I didn’t really build it. It’s an overstatement,” he says. But he was instrumental in bringing the Washington, D.C.-based Smithsonian Observatory to Cambridge to merge with Harvard’s facility, serving as its director from 1955 to 1973. The center’s Fred Lawrence Whipple Observatory in Amado, Ariz., containing the largest mirror telescope in the continental United States, is named after him.

The observatory is not the only thing that bears the Whipple label. He has discovered six comets, all named for him, published numerous books and articles, and mentored many younger scientists, including Carl Sagan. Science fiction writer Isaac Asimov was a close friend.

“I think that was my most exciting moment, when I was able to invite my parents and my family to the Rose Garden for the award ceremony.”