By Photo by Jon Chase Text by Elizabeth Gehrman 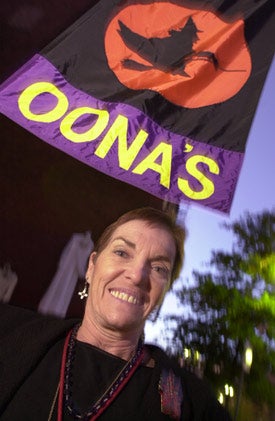 Rachel, a young shiatsu practitioner, grips Kathleen White’s left wrist and announces that her pulse is a little slow. “I probably need some sleep,” White says, “and I won’t get any till after Halloween.”

White isn’t complaining: The last couple of weeks in October are always more treat for her than trick, since Oona’s, the vintage clothing shop she owns on Massachusetts Avenue near Bow Street, gets its fair share of the $6.9 billion Americans spend every year outfitting themselves for America’s most popular pagan celebration. “By the end of this week,” she says, “you won’t be able to move in here.”

Whatever you’re looking for, Oona’s has it, or White – a quick-moving, quick-talking woman whose energy stores seem limitless – can tell you where to get it.

“Do you have anything snakelike?” asks a young woman.

“Are you doing Cleopatra?” White asks.

“Hmmm, I have a Cleopatra thing, but I don’t think that’ll work for you,” White says, naming a few nearby toy stores where the customer might find tiny rubber serpents to weave into her hair.

A young man has more luck. He exits the dressing room in a fetching short red kilt, which on Saturday night he’ll pair with a tied-at-the-waist white shirt and heels. “I’m going to be a schoolgirl,” he says. “It was easier than Madonna.”

Clothes that work not only for the Priscilla Ball or the Hasty Pudding Awards, but for everyday life as well – and the prices fit even the most stringent student budget. Elsewhere, you can rent a black dinner jacket for $100, for example, but, says White, “I sell them for $10 or $15. So it’s actually somewhat cheaper even than a rental. But I don’t want it back.”

After nearly 30 years in business, White – whose shop is named after one of her daughters – has become so well-known that she outfits not only the Harvard community but also residents of greater Boston, visitors from elsewhere in New England, and tourists from all over the world – the store’s being listed in Fodor’s and other guidebooks makes it a “destination” shop, one that people will travel to the square just to visit. In other words, forget that Harvard sweatshirt: the trendiest Japanese are looking for T-shirts that read “Oona’s: Experienced clothing.”