Symposia tickets are available to public

Like the assembly of recording stars that crowded onstage to perform “We Are the World,” or the one that backed up Willie Nelson on the more recent rendition of “America,” it will come together once and once only. And when it does, it will be like nothing ever heard before at Harvard.

The Inaugural Choir, which will lend its sweetly thunderous tones to President Lawrence H. Summers’ Oct. 12 Installation ceremony, is the largest choral group ever to perform at the University. Comprising the Harvard-Radcliffe Collegium Musicum, the Glee Club, the Radcliffe Choral Society, the University Choir, and members of the Kuumba Singers, this student supergroup boasts a head count of approximately 250 singers.

“There was talk in the early planning stages of just having a small group perform, but I thought that everybody should be involved. It will be much more festive, much more commemorative,” said Jameson Marvin, director of choral activities. 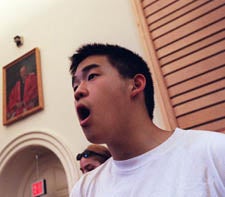 Marvin is sharing conducting duties for the Inaugural Choir with Murray Forbes Somerville, choirmaster in the Memorial Church, and Constance De Fotis, associate conductor of the Harvard-Radcliffe Choruses.

Once the Inaugural Committee had agreed on the basic principle of “the more the merrier,” there was still the far more complicated decision of what pieces the enormous assemblage of singers should perform. Selecting the music was a long process, Marvin said, but eventually the committee managed to choose a program with a good chance of pleasing nearly everyone.

First up will be the 13th movement of Benjamin Britten’s “Cantata Academica” (1960). The chorus will be accompanied by the Boston Brass Ensemble, a local professional group.

The piece was written for the 500th anniversary of the University of Basel in Switzerland, but Britten gave his permission for other institutions to adapt the piece by inserting their names into the text, which will be sung in Latin.

Next, for a change of pace, the chorus will perform “O Combien est plaisant,” a 16th century setting of Psalm 133 by Claude Goudimel. Marvin describes the piece as “gentle, pretty, lovely, and inviting – as well as short. We wanted to keep all the pieces short.”

Next, following the president’s address, comes a rendition of “Fair Harvard” by the Inaugural Chorus accompanied by the University Band under the direction of Thomas Everett. The assembly will be invited to join in on this hymn to a beloved alma mater, text by the Rev. Samuel Gilman, Class of 1811, to a traditional melody.

Rounding out the ceremony will be a piece that was added after the events of Sept. 11 – “America the Beautiful” (1882; music by Samuel Augustus Ward, lyrics by Katherine Lee Bates). The arrangement is by Somerville, who will conduct the piece.

The mammoth chorus has presented unique logistical problems. A special stage is being constructed along the east side of University Hall big enough to accommodate the 250 singers and 120 musicians. Microphone placements must be calculated with precision to allow the sound to be properly amplified. As Marvin points out, when singers perform outdoors, even such a large chorus as this, “the sound evaporates almost instantaneously.”

Marvin is praying for good weather on the day of the ceremony.

“Because it’s such a huge stage, there’s no tarp that will fit. If it rains, I guess we’ll all have to stand there with umbrellas.”

The biggest problem of all, however, has been finding time for rehearsals. Each of the component groups has been rehearsing its parts separately, squeezing in practice sessions for the inaugural ceremony amid already busy concert schedules. Only three rehearsal sessions have been arranged for the group as a whole.

“When you have a very large ensemble like this one, rhythm is the goal,” Marvin said.

Marvin is optimistic about the final result, although he acknowledges being just a little bit nervous.

“I feel responsible for the whole thing because I’m the one who’s been trying to draw everybody together. But I really think the event will be memorable and extraordinary.”