“What do we want? Peace! When do we want it? Now!” The familiar chant began halfway through a rally in front of Widener Library at noon, Sept. 20, despite an announcement by senior Stephen Smith that there would be “no chanting, no cheering.” Smith had asked for “somber but purposeful mourning” for the lives lost in the Sept. 11 terrorist attacks and a “reasoned, just, and forward-looking response to the tragedy.” Except for the brief outburst, he got it. Addressing the crowd of 300 or so via bullhorn,the half-dozen speakers maintained the dignified, responsible tone Smith had asked for. Brian Palmer, lecturer in the Study of Religion, spoke of the innocent lives that may be lost if America goes to war and asked for “a moment of silent mourning for those who have been murdered and those whose continuing breath is in our hands.” Tim McCarthy, lecturer in History and Literature, praised those “all over the world who extended themselves,” but deplored those “who are deploying rhetoric and deploying troops without thinking before they speak.” Freshman Alisa Khan spoke of her Muslim faith and said, “Now is not the time to harm innocent people.” Mica Pollock, an anthropologist on the faculty of the Graduate School of Education, urged America’s leaders to join in “a global alliance to investigate violence in all its forms,” and to work for world peace. “World peace is what Tuesday’s martyrs truly deserve as their monument.” 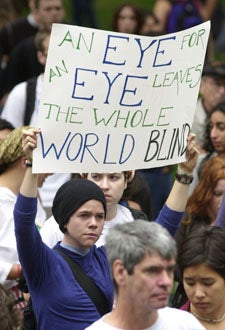 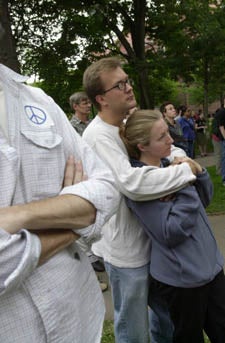 During the rally, Molly McOwen ’02, holds aloft a sign warning against retaliation for the recent terrorist attacks. (Staff photo by Jon Chase) Nancy and Todd Squires embrace at Thursday’s rally. James Williamson stands in the foreground donning a peace symbol on his shirt. (Staff photo by Stephanie Mitchell)